Results of the last mobility survey in Turin metro area

For the 2013 edition over 50.000 inhabitants aged 11 and over were interviewed as a representative sample of Piemonte Region preceded by a letter of presentation to 210.000 addresses.

In order to investigate the whole sample of citizens with the given quota constraints within the scheduled deadline two different CATI teams were employed in parallel. The post-processing phase has been complicated due to the verification of the collected data. Furthermore, all origin and destinations of trips have been geo-referenced and assigned to more than 1400 zones based on the address declared during the interview. First results were published in April 2015 as a subset focused on the inhabitants of the PTA metropolitan Area (32 municipalities and 1,5 million inhabitants).

A new survey is underway on all region, the results of which will be available in the second half of 2022. 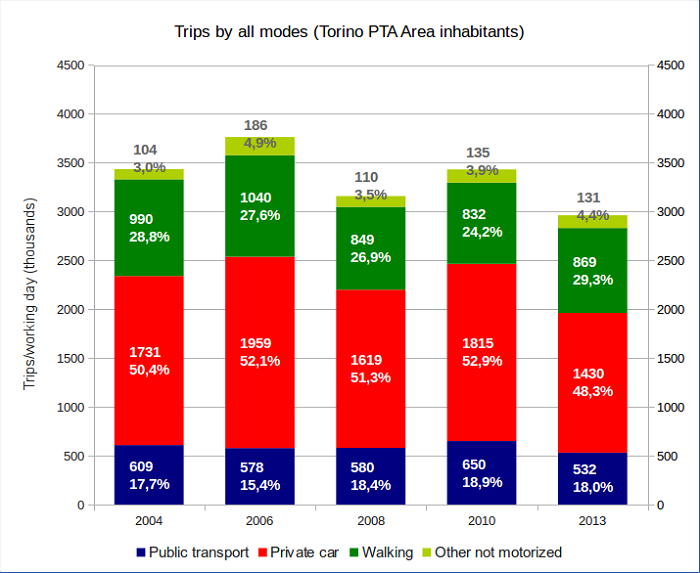 The perceived quality of public transport reached a score of 6,8 (out of 10) whereas the private car reached 7,4. With an 8,4 the Metro obtained the best score, while suburban rail (reorganized in 2013), having launched a new brand for the commuter rail product scored best measured over the last 10 years with a 6,7. Based on the same subset of data (PTA Area inhabitants) also single reports focused on the residents in all 32 municipalities were measured. The PTA Area reports are published on our website (in Italian only).