Since 2009, contracts have made provisions for a service quality perception survey on public transport in Ile de France, conducted by STIF. The aim of the survey is to assess passenger satisfaction with regard to service quality on the RATP and SNCF transport networks. In the new generation of contracts signed in 2012, the value and weighting of the financial incentives granted to the survey were significantly increased. Survey methodology The survey is now conducted throughout the year in train and bus stations and stops on the RATP and SNCF networks.

120,000 regular passengers are asked about the quality of service (compared to 20,000 users under previous contracts). In addition, the weighting of the perception survey in the bonus-penalty system of contracts has been revised upwards: the survey represents 10% of the total budget for financial incentives dedicated to service quality, compared to 1% in the 2008-2011 contract period. This reflects a tightening of STIF’s requirements for passengers’ experiences.

Passengers are interviewed face to face from Monday to Saturday all the year round (with a break from 15 July to 15 August) about their perception of main service quality topics: punctuality, passenger information (in regular and disrupted situations), atmosphere (reception and cleanliness of areas), accessibility and sales.

From a technical point of view, the indices are calculated as follows:

Lessons learned from the main results by topic 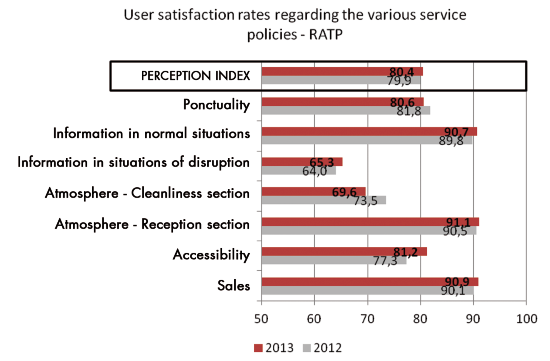 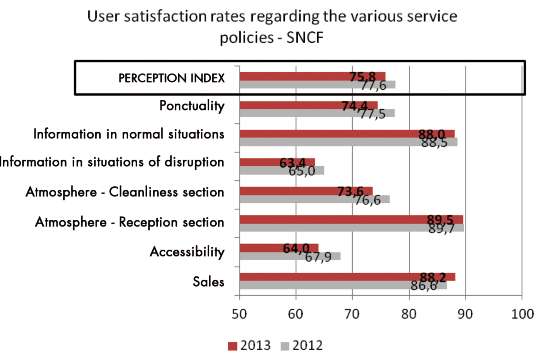 Between 2012 and 2013, only the sales topic has risen for SNCF while results for all other topics declined, pulling the perception index down, whereas for RATP all topics were rated higher or shows stability in satisfaction rates. Overall, for both operators, passenger satisfaction was high in relation to passenger information in normal situations, sales and reception.

The survey also revealed the existence of common challenges for both companies: information in situations of disruption and cleanliness of stops and station areas.

The RATP metro and the surface network were the most satisfactory for information in situations of disruption. The other modes, namely the RER, train and T4, went down in this area. In general, significant efforts must be made in the communication of estimated travel times and provision of information about the cause of service disturbances.

In the field of cleanliness, vehicle cleanliness caused the most dissatisfaction. The highest satisfaction levels were observed on the surface network (SNCF T4, RATP bus and tram), the lowest on the RER and metro.

In the field of punctuality, passenger satisfaction varied greatly depending on the mode of transport: while users of the metro and RATP surface network were quite satisfied, this was not the case for users of the RER and the train service. Besides this, SNCF faces another challenge: that of accessibility.