The BEST PROJECT - Learning from each others

BEST stands for “Benchmarking in European Service of public transport". Our goal is to provide public transport authorities, and PT professionals, with possibilities to network and learn from each other. PTA’s are often facing similar challenges, which makes benchmarking and networking especially useful. The BEST project consists of three main parts. A citizen satisfaction survey, a key figure database and seminar & workshops. In the following we will explore these three main parts in more detail.

The survey is identical in each participating city/region, and have been more or less unchanged since the first survey was completed in 2001. That gives participating cities/regions access to unique time series. But the main advantage of the survey is that it gives access to updated benchmark data. How well does your city or region perform in the eyes of the citizens, compared with others? Figure 3 shows satisfaction with access to seats in 2013. This is only one example. The BEST survey provides similar benchmarking data on almost 30 aspects of the PT service. It’s also possible to benchmark satisfaction scores for different target groups or customer segments (provided a sufficient sample size). This makes it easier to assess performance, and might give valuable input on a strategic level. 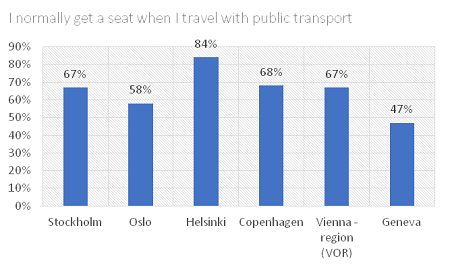 In addition to the “core” survey, each year a so called special survey topic is included. It’s a “survey in the survey” that collects additional benchmark data on a topic of common interest. In 2014 the special topic is “Fare evasion” and “Use of ticket media”. In this way member organizations gets access to benchmark data in that would otherwise be costly and time consuming to collect.

Finally the target group for the BEST survey is citizens, whereas several of the BEST member cities/region measure customer satisfaction in their own surveys. While it is important to measure how satisfied existing customers are, it is also important to also know how the general public perceive public transport. Especially if you want to increase public transport ridership.

Changing the data collection method allowed us to:

In addition it is possible to add new questions to the survey at any time. There is no need to wait until the next annual survey. This gives an increased flexibility, and can provide BEST members with preliminary survey results much faster.

Citizens perception of the public transport service is one thing, but ”hard” facts about the service provided, how much it costs, and how much revenue it generates, are also important pieces of information. That’s why the key figure database was established a couple of years ago. The purpose of the key figure database is to complement the survey with “hard” facts like costs, revenue, number of boarding’s, number of departures etc. This makes it easier to explore the relationship between “soft” and “hard” facts. Like the relationship between satisfaction with departures and actual number of departures, or spending on PT per capita versus satisfaction with public transport. In addition the key figure database makes the data more accessible for analysts in general. Currently the database includes about 20 key figures, which describes:

Based on these key figures a number of supply, demand and financial ratios are calculated per city/region, and per public transport mode.

The results from the BEST survey, and the key figures, are available to the member organization in a web based reporting tool. The reporting tool gives access to a number of predefined benchmarking reports, but also the possibility to study results for individual cities in more detail. The results can easily be exported to PowerPoint, or to Excel, if you prefer to design your own graphs or tables.

The web report also allows you to create your own graphs and tables, and save them for future use. When new data are imported into the system, the graphs and tables are automatically updated.

The final main part of the BEST project is the seminar and the workshops. Survey results and key figures provides a lot of information in a short time, and a starting point for exchanging ideas and experience. But to really understand what is going on, one has to get “behind” the numbers. That’s the purpose of the seminar and workshops.

This year the annual BEST seminar will take place in Bergen on the 18th and 19th of September. That’s a good place to start if you want to get to know BEST better. For more info about the seminar see Best web site.

Four workshops will also be held in 2014. In the workshops public transport professionals working with the topic in questions meet to discuss common challenges, exchange experience and to expand their professional network. The topics, venues and dates are as follows:

The workshops are open to all PTA’s. If you like to attend, or get more info about the workshops, contact the BEST Project Manager or take a look at our web site.

The table below shows share of positive evaluations (citizen satisfaction scores) per quality dimension in the BEST survey. 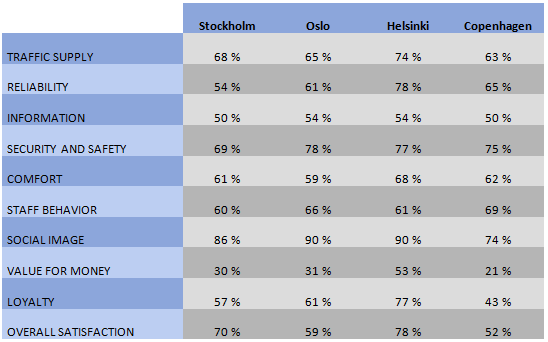