The capital of Poland has one of the largest public bicycle systems in Europe; new bike routes are constantly being put to use in Warsaw, and the capital’s citizens have just won the European Cycling Challenge 2014.

Warsaw defeated 31 European cities participating in this year’s edition of the ECC.

European Cycling Challenge 2014 is a campaign launched in May 2012 by the Italian city Bologna. The initiative aims at promoting bike as a means of transport. The popularity of this on-line competition is growing. In 2013, it was attended by 3 000 cyclists, and this year the number grew to 9 000 participants. A year ago, they cycled as many as 313 thousand kilometers, and this year the number reached 1.6 million of “biked" kilometers.

For more information on the campaign, please visit this website.

The bike competition took place throughout the month of May. It was open to all citizens moving by bike within the city limits. Only those journeys by bicycle were accepted where the bicycle was used as an alternative to another means of transport (tram, bus, metro, train, etc.) car, motorcycle, etc …) to and from workplace or school, to the cinema or to shopping. Sport/recreational activities were excluded. 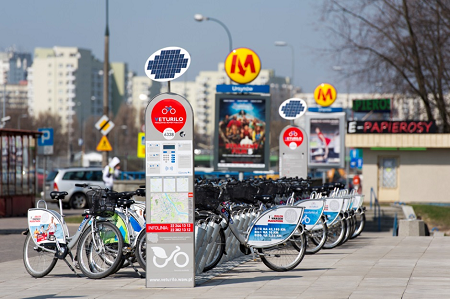 This result does impress me. In the capital, we are witnessing a real “bike revolution”, and the citizens use this means of transport more and more willingly. We shall continue to invest and expand the necessary infrastructure. I have just made the decision to allocate an additional one million zlotys (EUR 250 thousand) to that initiative– says Hanna Gronkiewicz-Waltz, the Mayor of the City of Warsaw.