The integrated transport network (VVS) covers the regional administrative districts. VVS is jointly owned by the operators (50%) and public authorities (50%). Its main functions are ticketing revenue and providing passengers with timetables and traffic information.

Public transport within the region is mainly operated by:

“S-Bahn,” the commonly used term for the suburban railway system was, established in 1930 in Berlin. The S-Bahn has come to mean fast, comfortable trains with a big capacity that are equipped with an adequate number of doors, allowing commuters fast entry and exit. Requirements for an S-Bahn system are: 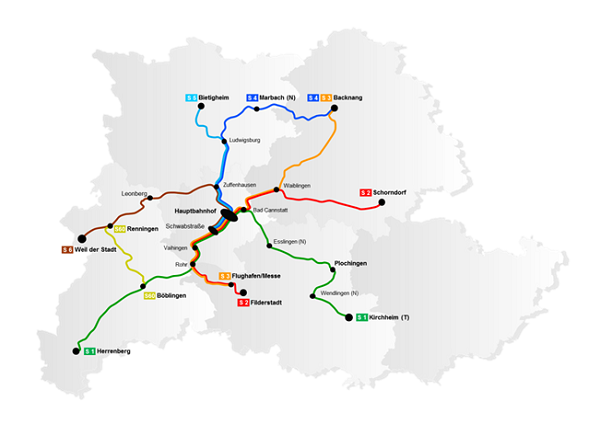 2.) Night time service in the region

In the year 2000, a regional night bus service was introduced on the weekends. The service was so successful that, after just a few years, it had reached its capacity. As a result, it was replaced in 2012 by extending the services of the suburban railway.

Generally, these services operate only on the weekends and the night before a public holiday. Since the end of 2012, three additional trains run to every terminus between about 2 and 4 a.m. End of 2016 this service will be extended to one train per hour and direction during the whole night.

An added benefit is that people living in the region are now able to take the suburban railway to catch the first morning flights on the weekends.

The VVS covers an area consisting of 3,357 square meters, with 2.6 Million inhabitants. About 455 different lines are under operation with 3,916 stations and stops. Forty different companies operate the network by running 1,699 busses and vehicles, serving 357 million passengers. (source: www.vvs.de).