On 11 December 2013, the STIF Board of Directors adopted an unprecedented plan to reduce pollutants emitted by buses. By 2020-2025 the aim is to have a fleet of all-electric and NGV Biogas buses in Ile-de-France, consistent with the aim of reducing greenhouse gas emissions by 20% written into the Plan de Déplacement Urbain d’Île-de-France (PDUIF - Ile-de-France Urban Mobility Plan).

First stage: purchase of hybrid buses, strengthening of the NGV Biogas network and installation of particulate filtersFrom 2014 onwards, STIF has asked the RATP (Autonomous Operator of Parisian Transports) which operates the bus network in Paris and nearby suburbs to accelerate the purchase of hybrid buses to replace the most polluting buses in the present fleet. Up to 2013 about 10% of vehicles were replaced each year. Due to an additional investment of €100M financed by STIF 40 to 50% of extra buses will be replaced between 2014 and mid-2016, making it possible to eliminate the most polluting vehicles quickly from the RATP fleet. The aim is to reduce the fine particle emissions from the bus fleet by 50% in 2 years (mid-2016).

At the same time, the existing NGV (Natural Gas Vehicle) fuel installations in Ile-de-France will be improved to benefit from developments in this sector. So, 90 new standard buses, operating on NGV fuel and fitted with EURO 6 engines, will be purchased. They will be allocated to the RATP bus centre in Créteil (South East of Paris) where an NGV fuel network is already installed. STIF has also asked the RATP to carry out studies for a second NGV bus centre to be created. 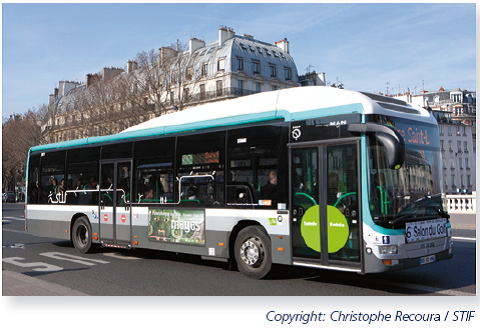 Furthermore, STIF has unlocked €32.5M of grants to enable private operators running regular suburban routes to equip all their bus and car fleets with particulate filters. Nearly 950 vehicles will soon be fitted with these. In addition, STIF will be responsible for the extra costs of acquiring hybrid buses for 24 routes operated in dense urban areas by private companies.

To achieve this, STIF has decided to continue, and develop, the experimental policy it conducts with operators on future modes of transport. The expected experiments are as follows: 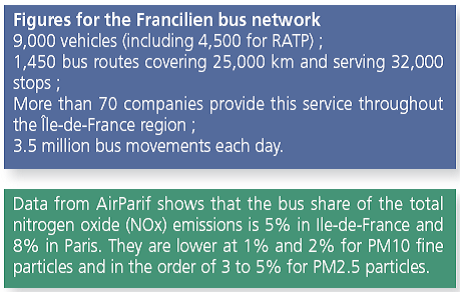