Transport for London (TfL) has published the world’s first transport health action plan, “Improving the health of Londoners”, which sets out how it is working to improve the health of people in London. According to London’s Transport Commissioner, Sir Peter Hendy CBE, transport has a significant role to play in hel-ping to tackle the major public health challenges London faces. If we can make the environment and our public spaces more inviting, then that will also encourage people to be more physically active.

As the capital’s integrated transport authority, TfL keeps London moving, contributing to its success as a world city. It also has an important role to play in the quality of life of Londoners and helping tackle some of the public health challenges London faces. Enabling people to be more physically active is a public health priority for London, as it can help to prevent some of our biggest health challenges including type 2 diabetes, obesity, heart disease and some cancers.

The choices people make for getting around the capital impact upon health and the action plan shows that transport is the main way that people stay physically active. More than two-thirds of all public transport trips involve walking five minutes or more and a quarter of adults in London get all of the physical activity they need to stay healthy through their everyday travel.

More people travelling by bike is a key outcome in The Mayor’s Vision for Cycling, which aims to double cycling in London by 2020 and to help grow the number of people benefiting from the health aspects of cycling. TfL has more than trebled spending on cycling, the growth which is set to deliver £250m in health benefits each year. 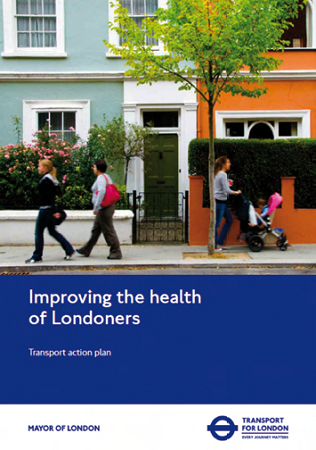 TfL is committed to improving air quality, reducing death and injury on London’s roads, as well as encouraging people to get more physically active. The Mayor, TfL and London boroughs are also working to transform London to make it a city that is easier and more pleasurable to enjoy on foot. A number of measures are being introduced to achieve this, including new and improved public spaces, better walking routes that link places people walk to, and more routes away from traffic.

TfL and partners are also expanding the coverage of Legible London pedestrian signs to help people easily find their way around the city. The action plan sets out ten actions to be delivered over the next three years to demonstrate the important role that transport plays in the health of Londoners.

Under the ten actions, TfL will: