Ambitious plans to create a thriving new district around Birmingham’s forthcoming high speed rail station have been unveiled. More than 141 hectares of land in the city’s Eastside district would be transformed in one of the biggest urban regeneration schemes in Britain, and by far the biggest redevelopment so far announced on the back of the HS2 high speed rail project.

The new developments will be focused around the brand new city centre station - Birmingham Curzon - where HS2 will terminate on its 49-minute journey from London. The station will place Birmingham at the heart of the new national high speed network with the first trains due to arrive in 2026.

The Birmingham Curzon HS2 Masterplan, drawn up by Birmingham City Council, also includes a new Metro tram route branching off the extension currently being built through the city centre and travelling down through Eastside before stopping directly underneath the high speed rail station.

Centro, the transport authority for the West Midlands, said the tram connection would play a key role in making sure the region got the maximum economic benefits possible from high speed rail. Independent research has shown that the West Midlands can more than double the economic growth and jobs offered by HS2 if the right transport infrastructure is put in place to best connect and feed into the region’s two high speed stations. Working closely with Birmingham City Council in drawing up the Curzon Masterplan, Centro has developed proposals to ensure people from across the West Midlands can easily access the HS2 station. The principle connection is a Midland Metro route that would stop underneath the station and then continue out through the Digbeth area before terminating at a park and ride facility close to the inner ring road.

Centro Chief Executive, Geoff Inskip, said: “Even in isolation HS2 offers significant economic benefits for our region yet we can secure so much more by getting the connectivity right. With the proper transport links we can double the benefits for the West Midlands, increasing the number of new jobs to 51,000 while securing an annual boost to the regional economy of more than £4 billion. 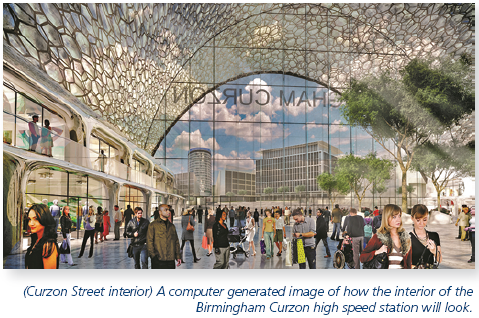 Taking the Metro to Birmingham Curzon is a cornerstone of that required connectivity. Not only will it provide a quick and comfortable link for the 12,000 West Midlands people arriving at the station each hour but it will also serve as an additional catalyst for growth in Eastside, helping to open up new pockets of development.” 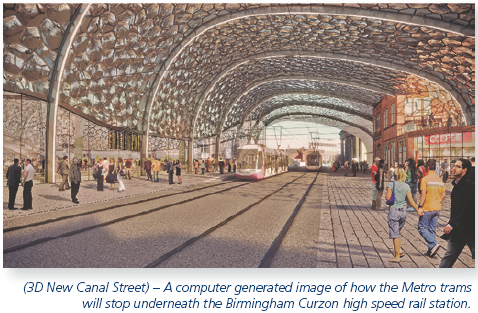 The tram link would connect the high speed station to a Metro system already undergoing a major transformation. Work is well underway on the £128 million extension through the heart of the city from Snow Hill Station to New Street Station and plans are also being finalised to take the trams on through a redeveloped Paradise Circus to the new library in Centenary Square. A fleet of 20 new trams will also start going into service on the existing Metro line between Wolverhampton and Birmingham later this year.

The cost of extending Metro to Curzon Street Station is expected to be around £50 million with another £55 million to take it down to the inner ring road. The extension would be designed to allow future expansion of the tram network to the east of the city, potentially linking it to Birmingham Airport, the National Exhibition Centre the UK Central business development. Mr Inskip added: “Last October Lord Deighton, Chair of the HS2 Growth Taskforce, challenged the regions to put in place the schemes needed to squeeze every possible benefit from HS2.

That’s exactly what we are doing with the Curzon Masterplan. Linking the Birmingham Curzon station to the Metro network will connect the wider West Midlands and especially people in the Black Country to the national and European rail connections offered by HS2. It would also mean that all of the city’s rail stations, so from New Street, Snow Hill, Moor Street/Curzon Street are connected by the Metro network. Birmingham Curzon needs that connectivity which in turn will help the region get the most from HS2”.