Last decade the role and relevance of the bicycle in Dutch mobility has improved. In cities like Amsterdam, the bicycle share in the modal split has grown at the expense of the car share and that of the public transport. In the city of Amsterdam about 800.000 inhabitants live who togehter own about 880.000 private bikes, so there is 1.1 bicycles on every inhabitant. This growth partly results from a compelling cycling transport policy in cooperation between the regional government and the local governments. Albeit also some challenges have to be mastered. For instance, in the Amsterdam Metropolitan Area the first traffic jams for cyclist occur in the major cycling routes. Also a growing demand for parking facilities for bicycles in public streets occurs, at public transport nodes and especially at railway stations. This article focuses on the bicycle parking at railway stations.

The position of bicycles in chain mobilityThe bicycle is undeniably an important mean of transport in the Netherlands. The bicycle itself is especially useful for short journeys up to 7,5 to 10 kilometres distance. However, combined with public transport it is even more successful. In 1990 only 6% of the users of the Dutch Railway network travelled to the railway station by bike. This percentage increased up to 30% in 2000, 40% in 2010 and a record 42% in 2012. At the railway station of arrival about 15% of the users of the Dutch Railways continue their journey by bicycle. 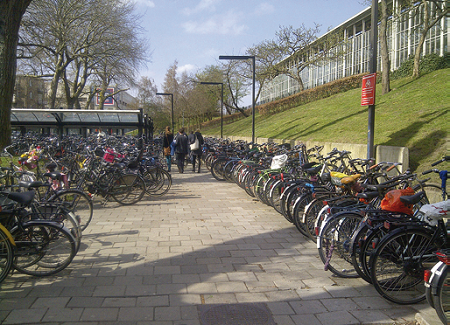 To estimate the needed numbers of bicycle parking places ProRail (Dutch rail infrastructure manager) modulated forecasts for the years 2020 and 2030. These forecasts are based on counted bicycles near a railway station, predictions of passenger growth and trends in transportation. The table illustrates the need for bicycle parking places at the two biggest stations in the Amsterdam Metropolitan Area in 2020 and 2030.

To raise the capacity of unguarded bicycle parking places at the railway stations new storage facilities where added to the forecourts. However, nearby most railway stations, especially in dense urban areas, there is not enough space to continue adding cycle parking places to cope with the growing needs. Besides, most cities have the ambition to improve the attractiveness and quality of the public space on forecourts, whilst removing thousands parked bicycles that interfere with this ambition.

This asks for new ways of facilitating the unguarded bicycle parking places like in dedicated buildings for the bicycles of building big cellars (sometimes with a capacity of 5.000 bicycles). These facilities demand new methods to manage and supervise in order to safeguard the user compared to the bicycle parking places on forecourts. This sometimes results in facilities with a usage fee creating tension between the need to facilitate the demanded capacity, the increasing costs of the management and surveillance (for the municipality or operator) and the policy to stimulate the usage of the bicycles.

To make sure that the cyclist use the big, guarded bicycle parking places instead of park their bikes at bridge railings, trees or lampposts, there are two options:

In other stations the municipalities created guarded facilities with no usage fee. These are well used but put even more pressure on the remaining guarded facilities with a usage fee. At the Amsterdam Amstel Station the Dutch Railways, Amsterdam, Stadsregio Amsterdam and ProRail started a pilot. Amstel Station, on the eastside of the city has a guarded facility in the cellar with a capacity of 1.300 parking places which was only used for 30%. Cyclist needed to pay a fee to use it. All of the unguarded, free to use, bicycle places on the forecourts are fully used. Some pedestrian routes were seriously blocked by wrongfully parked bicyclesand made the quality of public space suffer.

Quality of public space suffered. From December 2013 the guarded bicycle parking facility is free to use and cyclist are seduced by advertisements to use to station’s facility.

Also unsafe or badly parked bicycles are removed. The municipality of Amsterdam pays the operator. Evaluations show that bicycle parking facility now has an occupancy rate of 70%. All cooperating stakeholder organisations now try to implement this solution on other railway stations and main (future) public transport nodes (like at some metro stations) in Amsterdam.