For the period 2014 – 2020, the Commission last October proposed to build a European core transport network by establishing nine new major Corridors : 2 North–South, 3 East–West, and 4 diagonal. Under "Connecting Europe Facility" (CEF), the EU’s new funding mechanism supporting the development of high-performing, sustainable and efficiently interconnected trans-European networks in the fields of energy, telecommunications and transport, the Commission has proposed €26.3 billion for TEN-T Infrastructure development of which €10 billion has been earmarked for Cohesion Fund eligible regions.

Reshaping the map of European infrastructures means allowing a smoother and safer circulation of goods and people. In this line, commenting on the opening of new European Corridors, Vice-President Kallas put in mind once again that “Transport is vital to the European economy” and that the new infrastructure policy will “put in place a powerful European transport network across 28 Member States to promote growth and competitiveness”. The existing patchwork of European roads, railways, airports and canals will be turned into a unified trans-European transport network (TEN-T), a real backbone of Europe ’s single market, easing connections between Eastern and Western areas.

Following the EC proposal to develop a European core transport network by establishing the abovementioned nine new major Corridors, on 19 November 2013 the European Parliament gave its final green light to the financial package. This impressive project is expected to redefine European geography, accelerating East-West connections and deeply transforming the EU single market thanks to a real free flow of goods and people. The aim of new TEN-T policy is that by 2050 Europe’s citizens and businesses will be no more than 30 minutes travel time away from the TEN-T comprehensive network. 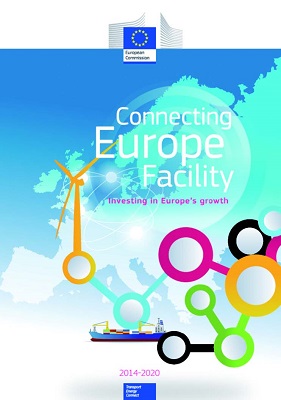 The initiative is possible thanks to a € 26.3 billion investment, assigned through ‘‘Connecting Europe Facility’’ (CEF), the EU’s new funding scheme promoting highperforming, sustainable and efficiently interconnected trans-European networks. CEF funding mechanism includes €10 billion that would be transferred from the Cohesion Fund, to be used exclusively in member states eligible for Cohesion Fund money. CEF aims to finance difficult projects that member states would not finance with the Cohesion Fund, of high EU added value, solving cross-border bottlenecks and providing missing links on main European routes. It should ensure sustainable and efficient transport in the long run, optimize the integration and interconnection of transport modes and enhance interoperability, safety and security of transport services. Projects need to be listed in the Annex and projects of the Core Network Corridors.

The European Commission aims to allocate this budget of €10 billion before 2017. Prerequisite is the respect of national binding envelopes from 2014 to 2016 : no member state can be allocated more funding for projects than its corresponding allocation. Co-funding rates of Cohesion Policy (see below) apply on CEF : maximum of 50% for preparatory studies and 40% on cross-border rail projects and bottlenecks. 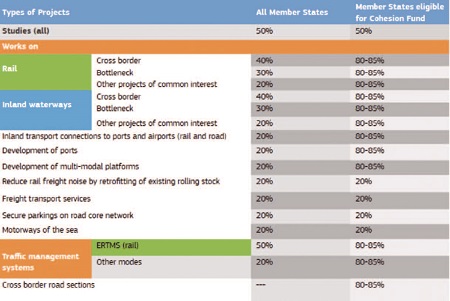 New in the 2014-2020 program is the funding for cross-border missing links creating urban nodes that boost multimodality. It supports business cases for investments in local networks. Olivier Onidi, Director European Mobility Network (DG for Mobility and Transport) said during POLIS-2013 Conference in Brussels on December 5 the Commission takes pride to include in CEF the whole mobility trip by opening funding options for intermodal urban nodes serving the complementarity of the Core Network. Critics saying local authorities now have no more than a consultative voice to the member states on this, while they carry the main burden of financial risks. Mr. Onidi said this could be solved by a strong link to the corridor coordinators. He acknowledged that the plan to implement urban node projects should involve both national as well as regional and local authorities. Also important to highlight are the links between the CEF-programme and the recently launched EU’s Framework Programme for Research en Innovation – Horizon 2020”, which will enable financial support for research in the field of transport to contribute to the TEN-T policy objectives, in particular new vehicle technologies (ITS) and associated supporting infrastructure.

More information on those websites :