Tax settlement in Warsaw offers a privilege for cheaper tickets

On 1 January 2014, a new fare scheme comes into force. It benefits people living in Warsaw by the introduction of additional discount in fares for people provided they settle their personal income tax in Warsaw revenue office. A new feature is that the new single tickets will allow travellers to transfer during their trip to another vehicle or a connecting mode of transport.

People living in Warsaw who during the taxable year filed a tax return for the previous year in the revenue office in Warsaw will be allowed to use long-term tickets with a rebate, valid both in zone 1 and 2. This Varsovian Card will also concern children of that group of people up to 20 years of age who are entitled to use the Young Varsovian Card (for tickets valid in zone 1 only).

The Young Varsovian Card may also be used by graduate, undergraduate and engineering students up to 26 years of age residing in Warsaw who settle their income tax in a revenue office in Warsaw or who are financially supported by their parents or guardians settling their taxes in Warsaw.

It is supposed to be a privilege for those who by paying their taxes in the capital support e.g. the co-financing of the public transport. It is also supposed to be an incentive for those who have not yet started to do so. Additionally, a special ticket will be introduced which will be eligible to children under 20 from families with 3 children whose parents or guardians settle their taxes in Warsaw revenue office. It will cost 99 PLN for each child, it will be valid for a year and entitles the cardholder to use it unlimited in both ticket zones during its validity. 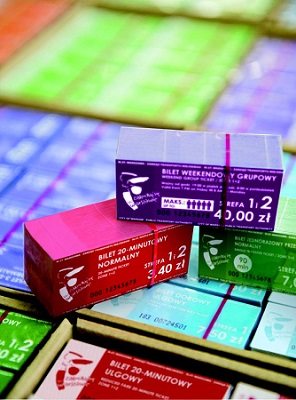 Another advantage of the new fare scheme will be its simplification. The number of ticket types will be reduced. The ones that are least popular will be canceled. This will include 40- and 60-minute tickets. Using the public transport will also be fostered by canceling a single fare ticket which must be validated in each vehicle. A single fare ticket valid only in zone 1 will be replaced with a single fare transfer ticket (also valid only in zone 1) valid for 75 minutes and enables the user to change lines or vehicles of transport or will entitle its purchaser to reach the terminus of a specific line. Single tickets for both zones will be replaced with a similar ticket valid for 90 minutes.

It will be of great convenience for passengers. Those not using travel cards or time-limited tickets will not have to validate a separate ticket with every change. This will not only be a more convenient solution but also less expensive for those who transfer to a connecting line, or change modes of transport during their journey.

A 3-day ticket will be replaced with a weekend ticket that will be valid from 7:00 PM on Friday until 8:00 AM on Monday in zones 1 and 2. The tariff will also include a special group weekend ticket that may be used by a group of maximum 5 persons who may want to visit the city using public transport. The rules of validity are identical to those of a single person weekend ticket.

The new tariff will also include altered additional charges when caught for fare dodging or making a trip without a valid ticket or a document that confirms the right to reduced fare travel or for pulling the emergency breaks of a vehicle without a justified reason.