Vilnius: turning the decline in public transport passengers around

Over the past decades, Vilnius has seen a vast decline in public transport passengers. To reverse this trend the municipality launched a public transport reform plan including rapid bus routes and integration of operators. The reforms seem to pay off: since July 2013 ticket sales have gone up and the majority of passengers value the network changes.

Since the 1980’s Vilnius has faced a major decrease of public transport use, dropping from 87.6 % (1980) to 39.6 % in 2011. This significant downfall was caused by a number of shortcomings of the local transport system, such as:

1. An ineffective route network due to urban sprawl. Vilnius has one of the lowest urban density rates in the whole of Europe. 2. Neither a rapid transit network, nor rapid bus routes were deployed. 3. Absence of an extended network of dedicated bus lanes, nor a bus priority system in place. 4. Two separate ticketing systems in Vilnius, one municipal and one for private operators.

Vilnius city decided recently to address these issues to reverse the trend of decreasing ridership. Over the course of five years, a number of studies have been conducted and improvements were made in preparation of a bigger PT reform. A dedicated plan for the introduction of new modes of transport has been prepared in collaboration with a number of partners including the Vilnius Gediminas Technical University.

Routes were adjusted based on surveys and passenger flow data. Citizens were encouraged to contribute to the discussions on route changes and new timetables. Over 500 suggestions have been received of which one-third could be taken in.

It was clear to the City of Vilnius that a package of activities had to be implemented to improve the PT system in the city and lead more people to use PT as their main mode of transport. On 1 July 2013, a major reform was implemented. The cornerstones of this reform are the introduction of rapid bus routes and integration of different operators.

1. Dedicated Bus Lanes and Rapid Bus Routes The withdrawal of old single tickets allowed the optimisation of the transport network. Since the PT network had been reorganised in the way that passengers would have to change buses more often (as compared to the PT system before the optimisation) to reach their destination, new 30-minute and 60-minute electronic tickets were introduced allowing passengers to travel with one ticket when transferring from one vehicle to another.

Moreover, Vilnius municipality realised that rapid bus routes (RBRs) would not be successful without the creation of dedicated bus lanes (DBLs). An additional 15 km of DBLs were created in the city to reduce travel time. This extended the total length of bus lanes in Vilnius to 35 km. In addition, the number of stops was reduced significantly. This led to the introduction of six rapid bus routes, shortening the average travel time by 12.5 minutes. A significant reduction compared to the average journey time of 48.75 minutes before. The travel speed of the rapid buses was raised by around 6.4 km/h, equalling 37% of the speed on RBRs.

The RBRs serve the central part of the city. This zone covers approximately 75 per cent of all residential and work places in the city. The speed of the vehicles is around 25 km/h and the buses run approximately every 4-6 minutes.

These top-level bus routes are supplemented with main routes and suburb routes. The main routes serve the central and the middle city zones. Buses and trolleybuses operate in these areas with services running every 10-15 minutes.

The suburb routes serve the peripheral and suburban zones of Vilnius and are operated by multi-capacity buses. The frequency of these services corresponds with the passenger flow. 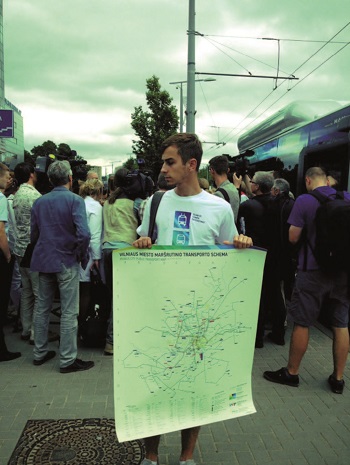 2. Integration between different operators The different ticketing systems of the municipal and the private operator required duplicated routes to meet the needs of ticket holders. Once an integrated electronic ticketing system is implemented, the need to maintain duplicate routes will vanish. The Mayor of Vilnius Arturas Zuokas said that the elimination of duplicate services will save the city some € 5.8 million a year. Savings that may be used to finance further improvements of the PT system. A total of € 1.02 million was invested on the measures for PT reform. The DBLs made for the main share with about € 950 000, about € 62 000 was spent on communication activities about the reform.

Vilnius was faced with a number of obstacles during the PT reform process. Firstly, Vilnius municipality received criticism from users because of the expulsion of some private operators. The idea was to allow private operators that meet certain standards into the Vilnius PT system. For that reason the partnership agreement between the city and private operators was not renewed. The disappearance of private operators led to doubts about whether the Vilnius PT company would be able to accommodate the growth of ridership adequately all by it self. Secondly, opposition from political counterparts caused delay in the implementation process. Vilnius has experienced that major reforms are likely to generate opposition from many, especially because of uncertainties to be resolved surrounding the implementation. Nevertheless, Vilnius PT values the lesson that well prepared changes are risks worth taking to bring about significant improvements.