Local rail services are provided by Northern Rail under a franchise agreement with The Department for Transport and SYPTE. The existing franchise is due to be renewed in April 2014 with a number of operators likely to bid for the right to operate trains.

Stagecoach Supertram serves the city of Sheffield with three light rail routes covering 29km (50% of the system is on street running with mixed traffic). The tram network links five park and ride sites with the busy city centre and gives easy access to the rail station, shopping areas, both of Sheffield’s prestigious universities, the Cathedral, sports arenas and many new popular entertainment venues.

Bus services are provided by a number of local operators ranging in size from, large operators with international interests (Arriva, First, Stagecoach) to small local businesses -85% of mileage is operated on a commercial (unsubsidised) basis.

Map of the operators in sheffield, and In South Yorkshire. Map of the Supertram. 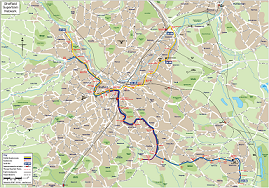 This map above shows the rail network for South Yorkshire and some of the surrounding areas, the stations and lines SYPTE are responsible for are in the shaded area.