A tramway network booming in Ile-de-France Region: the emblematic example of the tramway T3

The tramway network in Paris area has known a significant development with the official opening of three tramlines extensions by the end of 2012: 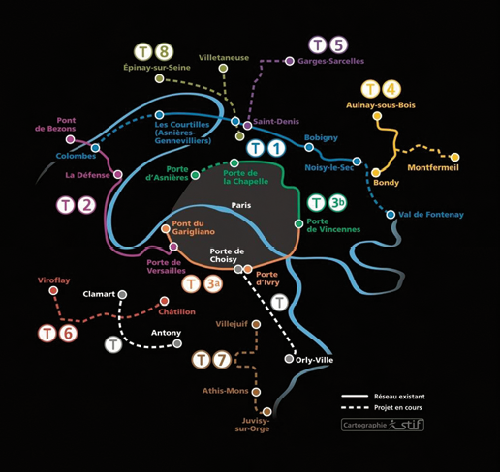 Currently, four tramlines are operating in Ile-de-France region: T1, T2, T3 and T4. As shown on the following map, the network will be completed by the commissioning of four other lines by the end of 2014: T5 (Saint-Denis- Garges-Sarcelles), T6 (Viroflay- Châtillon), T7 (Villejuif-Athis-Mons), T8 (Saint-Denis-Epinay-surseine- Villetaneuse). Two other tramlines projects are being studied (one between Porte de Choisy and Orly-ville and another one from Antony to Clamart).

The official opening of the Tramway T3 extension, on 15th December 2012, marks a new stage of the emblematic T3 project, first modern tramway in Paris proper. The first section of the project, between Pont du Garigliano and Porte d’Ivry, usually called Boulevards des Maréchaux Sud, was opened in December 2006.

Due to the need of offload at Porte de Vincennes, the T3 has been divided into two sections called T3a and T3b. 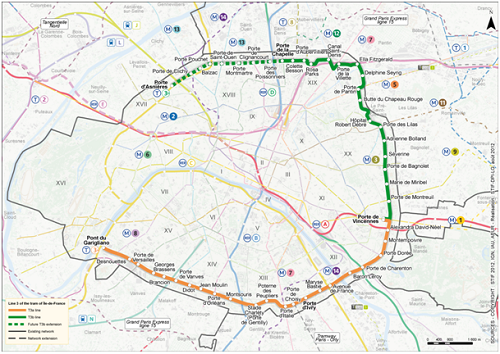 The T3a line connects Boulevard Victor–Pont du Garigliano Rapid Transit Railway station in the western part of the 15th district (arrondissement in French) with Porte de Vincennes metro station in the 12th district. The T3b line connects Porte de Vincennes to Porte de la Chapelle in the 17th district. The cost of the T3 project extension is € 652 million. The financing of the transport project and qualitative layouts are shared between Paris City Hall and the Regional Council of Ile-de-France, for € 583 million (73% of the total cost) and € 218 million (27%) respectively.

Operated by RATP, the extension of the T3 allows connections with 2 lines of the RER (Rapid Transit Railway), 9 metro lines and 44 bus lines. This extension represents 14.5 kilometres for 26 new stations. 170 000 inhabitants and 100 000 jobs are now served.

The design selected for T3 is the Alstom Citadis 402 which already runs on the first section of the line. The Citadis is the most developed tramway model in France (present in 18 cities). It is supplied through an overhead contact line and offers a capacity of 304 people, including 78 seats. On board, it is fitted with the very best passenger information equipment and offer outstanding passenger comfort (air conditioning and video security systems). The Citadis is also accessible to all with integral low floor, spacious layouts, spaces dedicated to wheelchairs and pushchairs.

This vehicle fleet has known a graphic change in comparison to the Boulevard des Maréchaux Sud section. The STIF livery and its bright silver colour have been appended onto the top part of the tramway, as well as the brand logo of the STIF. 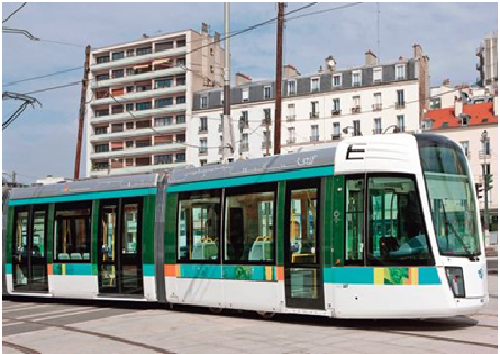 In fact, the STIF finances 100% of the purchase, the renovation of all the vehicle fleet as well as the operating cost. The integration of the tramway in public space was designed carefully. The T3 extension has drawn a new urban reorganization and contributed to the cities’ development by improving local services in Paris East area and by reinforcing connections with adjacent municipalities.

Large pedestrian spaces and cycling lanes have been converted. Two permanent traffic lanes have been kept for vehicles in each traffic way. A dedicated-lane tramline where more than 60 000 square metres of turf has been planted contributes to a flowing and scheduled traffic, which provides passengers with a good quality of service with a frequency of every 4-5 minutes in peak hours and every 8 minutes off-peak hours.

The arrival of the T3 also required the achievement of specific infrastructure. 36 engineering structures had been constructed or altered on the T3 rail extension project (walls, bridges and tunnels), including for example, the enlargement of Pont National and the deletion of Porte de Vitry viaduct in the 13th district. Moreover, an artistic dimension was included in the project.

About twenty artistic projects were implanted on the tramline territory, on different sites deemed to be remarkable or symbolic by their history or sociological characteristics. This global artistic project served as a link between the five Parisian districts and the eleven adjacent concerned municipalities. It reinforced and followed the transformation of these public spaces located outside of Paris City. Financed exclusively by the Paris City Hall for € 11.178 million, artists from all over the world committed themselves to the project. This artistic thinking was elaborated in order to improve visibility and comfort in stations. The art works also contributed to the identification of transport modes and transit connections.

Bertrand Delanoe, the Mayor of Paris, said: «The T3 line has enabled a true sewing work with adjacent municipalities. In the South, more than half of the journeys concern flows between Paris and adjacent municipalities». The extension of the T3 participates to a sustainable improvement of public transport in Paris and Ile-de-France region. The T3 project is still on-going. A new extension of this line to Porte d’Asnières by 2017 has been submitted to Public Inquiry since 5th June 2013, date of the first public meeting. The T3 will then stop at different stations in the 17th and 18th districts but also in the municipalities of Saint-Denis, Saint-Ouen, Clichy and Levallois.

As a consequence, a significant development of public transport service is supported by the STIF since 2006 with € 505 million invested to provide additional services, including € 289 million for the bus and tram networks.

This policy corresponds to the general objectives of the STIF and the Regional Council of Ile-de-France aiming at supporting development in Paris-Ile-de-France region by continuing to roll out metro and tram infrastructure, improving services to existing stations in the inner suburbs, facilitating and promoting the use of public transport (increased convenience, regularity across the entire network and intermodal facilities).