Bringing more travellers in tram, bus and metro to their destination faster is the joint ambition of Stadsregio Amsterdam and municipal transport company GVB. Moreover, this can be done with much less funding. With the transport plan 2014 ’Towards better public transport’ adopted by the executive committee of the Amsterdam City Region the has undertaken it’s first concrete steps towards an improved network. Until 2024 incumbent GVB expects to make the Amsterdam public transport at least 10% safer, more than 20% faster, whilst attracting thereby a third more passengers. Ridership is expected to rise from 740.000 users in 2012 to somewhat less than one million in 2020. GVB envisages at least 40% less dependence on subsidy for operations in this period .

The Amsterdam urban transport contract is expected to be awarded in Autumn this year to the GVB until 2024. Stadsregio will make use of a new provision in Dutch law on the direct award to an inhouse operator, complying with the PSORegulation (COM 1370/2007) of the Commission.

Public transport in Amsterdam has to do with considerably less operating costs from 150 million in 2011 to around 50 million in 2024. But by making smart choices, the quality of public transport even goes up. GVB does so by responding to the changing mobility flows, to shorten a network to provide clear, dynamic travel information and by simply optimize the supply of service focused on where their users are concentrated to where they want to travel at shortened travel time. It also aims to improve social safety.

More high-frequency lines: shorter travel times Public transport is not only available to all travellers, Amsterdam dwellers, occasional users and short stays (tourists), but also for students and commuters. Through new timetable concepts commuters and students should be brought faster to their destination, offering a easy and reliable transfer at one of the six main public transport nodes on the metro/railway ring: Schiphol International Airport, Amsterdam South station, Central station, Amstel station, Bijlmer-ArenA station and Sloterdijk-station. 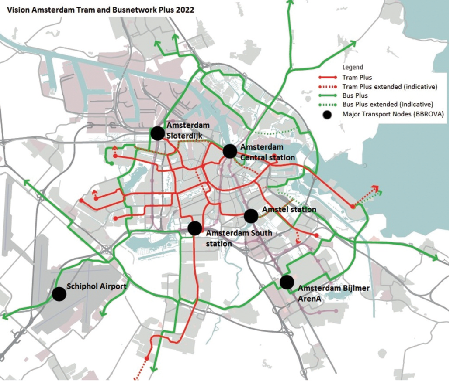 The high-frequency metro is and will remain the backbone of the public transport, notably even stronger after the opening of the North / South metroline (foreseen December 2017). Trams and buses should be given a better connection to the various subway lines that offer higher frequencies. 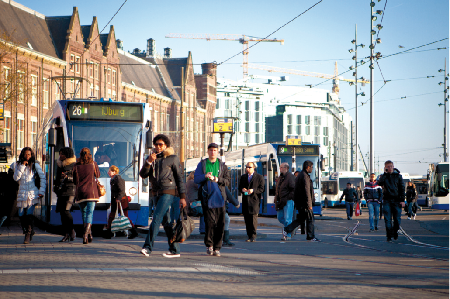 The current "spaghetti network" of the Amsterdam public transport is dense, winds through the city and has relatively low frequencies. Today’s regular traveller values more and more a high frequency. One reliable transfer on their trip is more or less accepted by regular users, provided the frequency of the service is high and therefore there are only short intervals to the connecting service. As of 2014 public transport is going to focus on significant numbers of users. The focus shifts from a guaranteed offer of weak lines to corridors with particularly heavy ridership. Some of the least frequently used tramlines as well as bus routes will be curtailed or could eventually disappear all together.

To guarantee a large group of users more to travel to their destinations quicker, some 25 rarely used network stops (of a total of 1900 stops) will be eliminated in 2014. For the 3000 people who use these stops daily, an alternative stop will be offered at a distance to maximum of 400 meters. In contrast, 80.000 people will be arriving faster at their envisaged destination. The metro will eventually offer higher frequencies and does so in 2014 by as a first step by increase the frequencies on Saturday and Sunday mornings.

Investments to drive high frequency The Amsterdam City Region will in the period 2014-2025 make around a 600 million Euro additional investment in the infrastructure for improving the quality of urban public transport infrastructure. Much of it will be spend in and around Amsterdam.

These investments include modifications to the infrastructure and free flow measures, such as more free bus ways and tram lanes and also the removal and installing of unprofitable stops and stations. With the current/existing plans, the total investments will amount to 1.2 billion euros.

The Regional Council of the City Region Amsterdam sets the minimum general outlines of the network system, such as the number of users to be serviced, the quality of transport supply and social security. The board of the Amsterdam City Region then will award a contract to an operator that delivers these output corresponding with the level of the available budget. The public transport company determines how within the framework and within budget it can best deliver an integrated network performance.