Since July 2nd, Rota marine terminal has a free bike service, thanks to its inclusion in the + Bike program. This bicycle storage facility, called "Gubi", was imaginatively designed and manufactured from stainless steel and transparent polycarbonate. The terminal is equipped with 10 units of bicycles for rent for free during this first phase of implementation. Also a new system of bicycle storage, available for users of the metropolitan transport lines was opened.

All the bikes are labeled with the corporate image of the Consortium, equipped with locks and baskets at front. Free bicycle-use for cardholders transport was already available in maritime terminals of Cadiz and El Puerto de Santa Maria, and also in Jerez bus station.

With the commissioning of this action, all municipalities connected by public transport through maritime service belonging to the Consortium, have free bikes. They also join Jerez bus station, which is also attached to the program + Bike. + Bike program was implemented in 2006, with the objective of making available to the metropolitan public transport users to make their bike tours of the bay municipalities free of charge. With this service, users who travel Consortium card can use free bicycles to move around the urban areas of the municipalities of the Consortium, meeting the conditions set, turning the bike in an alternative mode of public transport and favoring its intermodality. The first terminal to join the service was Cádiz, which was followed by Jerez bus station and the seaport of El Puerto de Santa Maria in 2010. 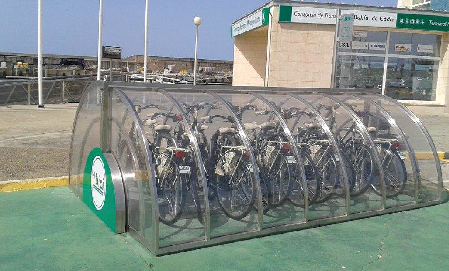 + Bike program is part of the ongoing commitment of the Transport Consortium of Cadiz Bay to promote the use of bicycles, which are part of other initiatives such as the Master Plan for the Development of Bicycle Transportation in the Bay of Cadiz. This Master Plan was recently approved by the Board of Directors of the Consortium at its last meeting that took place on June 6th. It carries a cycling network in the bay that will be 65 kilometer network of first order, of which 52 kilometers will be newly constructed.

Moreover, the program’s inception in Rota + bike coincides with the entry into force of summer schedules of the shipping lines, which since June 22 have led to increased shipments for both lines of 52 additional outputs a week.