Only in 2012, the service reached a total number of 431 022 passengers, of whom 21.3% used line Rota-Cadiz and line Cadiz-El Puerto de Santa María up to 78.7%. Between January and May 2013, passengers did 114,850, 35 daily returned expeditions from Monday to Friday in the line to El Puerto de Santa Maria and 15 to Rota, as well as a total of 34 expeditions on Saturdays, Sundays and holidays, distributed between the two lines. 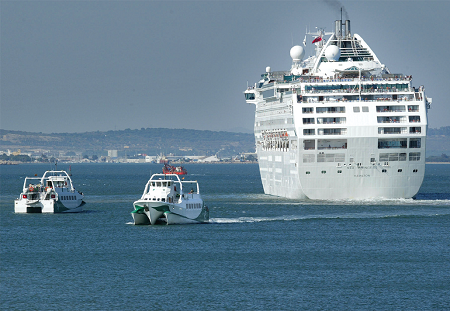 This project of public transport, unusual and pioneer in Andalusia has become one of the main mark of Transport Consortium of the Bay of Cadiz, which only has similar references in the Ria de Vigo. After seven years of running, the service has reached the initial goal intended to turn the bay into a big public plaza connected and communicated through transport by sea.

The maritime fleet currently has four metropolitan catamaran boats that operate on both lines Cadiz-El Puerto and Cadiz-Rota. The service initially started with two boats that were built by the Government of Andalusia in 2005 through the Public Ports of Andalusia (now APPA), later two more boats were incorporated: one built by the APPA, and another by the Consortium itself, with some contributions from the Government of Andalusia.

The establishment of the two shipping lines was accompanied by investments in each port in the towns connected by this service (Cádiz, El Puerto de Santa Maria and Rota): building Metropolitan Marine Terminals, berthing points and facilities for passenger boarding and electronic information panels. The marine terminals were built by the Andalusian Government, through the APPA in 2006.

Later, thanks to the consolidation of the service, the Consortium undertook the expansion and reform of the Maritime Terminal of Cádiz (2008) and the improvement and expansion of the maritime terminal Rota (2011).

The marine terminals of El Puerto de Santa María and Rota were provided by parking cars (+ parking) for public use but preferred shipping service users, and all of them can be used + bike program and the advanced ticket sale, among other advantages associated with the use of the travel card of the Consortium.

On the occasion of the celebration of the seventh anniversary of the Maritime Service, last June 6, Transport Consortium made a scheduled visit with "OUR ELDERS", as it has done since 2010 with the "CLASSROOM CONSORTIUM PROGRAM".

Given the success it is having in the school program, this initiative was presented on the occasion of its anniversary. With all this, it intends to convey the benefits of public transport to our senior users over 65 years. On this first occasion the visit was organized by the Delegation of Social Welfare, the two Centers Senior Assets of Cádiz: La Paz and Caleta, with the participation of 70 seniors, accompanied by two representatives from both centers and a consortium technician. 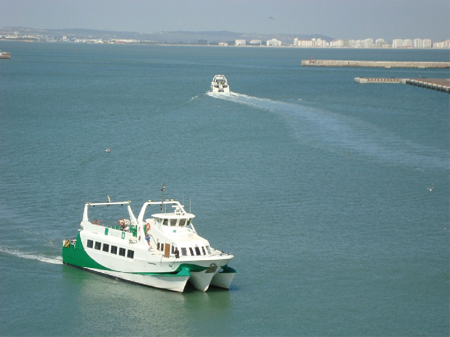 With the launch of the maritime service, the Consortium has managed to consolidate a maritime transport system in the bay that is safer, more frequent, of better quality and therefore more in line with the needs of the regular users of today. It is remarkable that the maritime service reduces travel time, diminishes environmental pollution, prevents congestion and circulation disorders and brings integration with the natural environment.

Since its launch, the maritime service of the Transport Consortium has contributed to the improvement of traffic conditions in the municipalities of the bay. On the other hand, it offers an affordable, convenient and efficient alternative for the private cards.