TUSSAMTussam is a Municipal Limited Company that manages the service of the collective urban transport in the city of Seville.

CONSORCIO DE TRANSPORTE METROPOLITANO DEL ÁREA DE SEVILLAIt is composed of la Junta de Andalucía (Regional government), la Diputación Provincial de Sevilla (Provincial Council), the city of Seville and 44 municipalities of the metropolitan ring, is a supra-municipal public corporation that coordinates the bus service which links the municipalities of the metropolitan ring with the city.

RENFE CERCANIAS (SUBURBAN TRAINS)It is a public service company for the transport of passengers by railway that depends on the Ministry of Public Works.Its task is to provide passengers in the metropolitan area with rail transport.

SEVILLE METROIt is a company created for the commercial exploitation of the Seville Metro Line and it is partially owned by the Junta de Andalucía (regional government). Its objective is to speed up commute times at the city of Seville in its influence area, making both communications and user’s journeys easier. 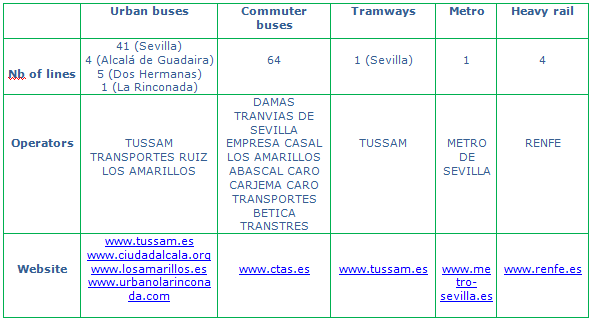 General map of the network