The 1st September 2012 was a breakthrough for Prague’s and the surroundings Public Transport System. A project prepared for several years that brought a lot of changes not only to Prague’s citizens, but also to our organization ROPID, that planned these changes.

It all started about six years ago, with a study on the efficiency of the transport system. It appeared that while the overall sytem of buses trams and subway was known and used by the population, some routes were over crowded while others were run at half seat capacity. Some parts of Prague were simply not connected in any reasonable way, and sometimes one had to use a car in order to get quickly from point A to point B. Some parts of subway and tram lines were literally bursting at the seams and intervals could not be shorten any more. Something had to be done. The plan for overall simplification and optimization was born. The success of some German cities in reconstructing their networks inspired the project.


2012 – the year of courage2012 was the turning point : Prague had already enough low-entry buses, main tram tracks were reconstructed, bus-lanes were opened in the most critical places, the ratio of articulated buses had increased. The optimization and overall simplification of the tram and bus networks could thus be drawn and most important it met the support of Pragues’s establishment. The project was approved in June 2012.

It was all about offering more and better to our passengers. In particular the border quarters of Prague that had become within the years places to live but also to work, entertain and go shopping, needed to be better connected. These new lines would come in exchange for other ones less occupied that had been designed decades ago never changed and not fitted any more to the emerging needs of the Prague citizens new lifestyle.

It was also about simplifying the network and make it usable by occasional passengers. The aim was to attract car drivers for example in helping them to read the network map for planning a trip : which mode, which line is going where ? We chose to reduce the number of bus lines and build a backbone network of buses called ”metrobus” with short intervals guaranteed and weekend services. 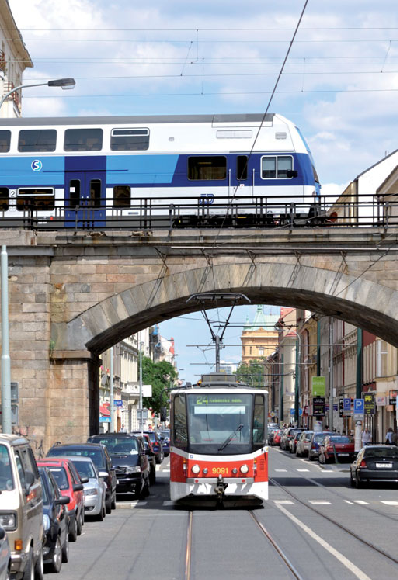 Nervosity before the premiere…Changes were approved by the Prague Council about three weeks before the launching and gave way to a huge media campaign for information. Medias were even competing for the most exhaustive detailed information to the point that it brought some fears that the transport system wouldn’t be ready in time. At least everybody knew changes were to occur!

The most important media channel was internet (specialized web presentation and facebook) because it is the one favored by a large majority of our passengers. For those without internet access, hundreds of thousands of leaflets were distributed in a variety of places including stations, public buildings and long distance trains.


… but the roll-out went wellOn Monday, September 3rd, Prague woke up into a quiet morning, everything was working fine. All bus- and tram drivers arrived to work and almost no one got lost. Passengers were suprisingly disciplined and informed. Indeed even the most optimistics had not expected such a smooth course that lasted also in the following days. Of course some minor problems emerged that were rapidly solved but all in all it showed that the new configuration of lines did not affect the regularity in any significant way.

Among issues to solve, intervals had to be shortened, bus stop had to be moved or shelter had to be installed in other places. Some new lines, especially thosethat had directly connected border quarters of the city, were quickly filled and had to be strengthened. Transport surveys are being made from the very first day of the changes so that we can check the setting of all parameters.

What’s next?Monitoring keeps on going, so that final results and outcomes can be objectively evaluated after the whole system settles down, and passengers find their optimal connections. A large survey on passengers satisfacion will complete the evaluation. We hope this ”transport revolution” will bring more customers and seize less tax-payers money as was the case in Hamburg or Munich. For the time being we have to fine-tune the system and withstand a wave of negative emotions that is inherently connected to any change of rooted habits ”says Director Filip Drapal”.