Transport bosses in the UK have launched a ground breaking agreement under the Sheffield Bus Partnership that has seen many passengers in the city paying lower fares for their journeys, and travelling around more easily.

The agreement is a voluntary partnership that brings together South Yorkshire Passenger Transport Executive (SYPTE), Sheffield City Council, and operators First South Yorkshire, Stagecoach Sheffield, and Sheffield Community Transport. The partners believe that by working together they can make the network more simple, flexible and convenient.

The innovative, city-wide partnership is the first of its kind, and has been put together with the overall aim of improving the bus network so the number of people using it increases. 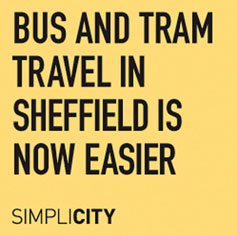 After gaining final approval from South Yorkshire Integrated Transport Authority (SYITA), the new network launched under the promotional positioning ”Simplicity” on 28 October 2012, with new discounted multi-operator tickets that saw fares fall by as much as 23 per cent. Up to 35 per cent of customers stand to benefit from the new fares and range of new tickets.

This is the biggest change to buses in South Yorkshire since services were deregulated back in 1986 as part of the Transport Act 1985. This meant any bus operator could run whatever commercial services it wanted to, as long as it gave 56 days’ notice for the introduction of any new services, the withdrawal of any services, or any timetable changes.

Critics argued that this resulted in congestion and duplication on some key routes, and reduced services in outlying areas, as well as competing timetables that were not aligned to the needs to the customer.

The Sheffield Bus Partnership tackles and find solutions for these issues by encouraging operators to work together to offer more attractive customer propositions, including more coordinated timetables.

The partnership carried out a public consultation on its proposals in June and July 2012, and used customer feedback to directly inform some service changes. David Young, SYPTE Director of Customer Experience, said: “This ground breaking agreement is a new start for buses in Sheffield, one that offers the potential to grow the number of people using buses by offering an improved network.

We have listened to our customers and altered our plans to ensure the travelling public’s needs are best met. This is the Sheffield people’s bus network, designed in consultation with them, for them. We hope it will persuade more people to make the switch from card to buses.

”This pioneering project paves the way for other transport authorities to use Sheffield Bus Partnership as a benchmark for network development”.