Our society is becoming increasingly mobile and those who travel a lot want to keep well informed. This is particularly true in urban regions where the private car is gradually declining in importance. Nevertheless: the private car still suggests the much praised individual self-determination, while users of the local public transport service (PT), on the other hand, have sometimes the feeling of both less flexibility and more dependency.

It is, however, possible to further improve the situation in favour of the PT by providing passengers with information, which will make them feel that they are in good hands. In this regard, the VBB has already achieved a great deal. In today’s highly differentiated world of technology, the VBB is unfortunately not able to serve all the operating systems or target groups by itself.

Alternative ways of providing information have to be sought: in those areas where the VBB cannot itself be active, the answer may lie in cooperation with third-parties. In order to further increase the quality of information to passengers in this regard and – as a result – the acceptance of local public transport both as a transportation option and sensible alternative to the car, this represents a good approach.

The current VBB cooperation for the purpose of better passenger information contains two main elements: firstly external software developers are directly able to access the VBB-Fahrinfo (timetable information system) via an interface (API), and secondly, the VBB is participating in the OpenData Initiative launched by the Federal State of Berlin.


External interface to VBB-Fahrinfo (API)Since the middle of 2010, the VBB has provided an interface (the so-called Application Programming Interface - API) for external software developers, enabling the direct online integration of the State’s timetable information system VBB-Fahrinfo (fahrinfo. VBB.de) into their own services and applications. By this means, a user accessing such an application developed by thirdparties will obtain exactly the same connection information as he would do by accessing a VBB service directly. The advantage here is that the developers are free to concentrate on the targetgroup specific implementation of the application, without having to worry about missing any updates in the timetables. The API enables them at all times to access the current connections for the whole of Berlin and Brandenburg. 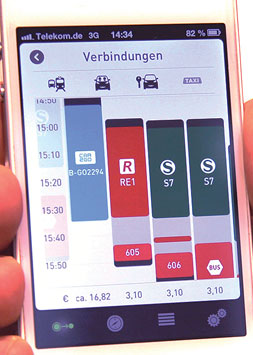 The demand for access to the VBB API is constantly increasing and this is indeed confirmation that the right decision was made by VBB. The VBB API access is initially provided on a test basis to allow developers to test and implement their projects undisturbed in a protected environment, be they for end user services, university projects or for trying out on a ”just because” basis (more information at: VBB.de/labs). Once the applications are working stable, they are placed in the status - ”productive”. Perhaps the most famous “productive” customer is NOKIA, who has integrated the VBB-Fahrinfo into its ”Bus&Bahn” app (already preinstalled in new equipment).

Other forms of cooperation, supported by the VBB with the VBB Fahrinfo API access, go a step further in the direction of multimodal information services. For example, users of the Daimler AG ”moovel” Mobility Platform can decide by themselves how they would like to travel from A to B. Depending on the route, the customer receives various offers, enabling him to select from PT, car-sharing, taxi and ridesharing (or combine them) – according to whether he would like to travel by the cheapest, quickest or most environmentally friendly option. This service was started on 29th October 2012 as the 2nd pilot project in Berlin (following the Stuttgart project) with the PT information coming directly from the VBB via its API.

By means of these and other forms of cooperation, it is possible to create more information channels, in which PT information is available, than the VBB could achieve on its own. This, in turn, can result in creating a positive image for local public transport.

Federal State of Berlin OpenData InitiativeUsing PT information a whole lot more is possible than just the timetable information service, because it can be combined with other (added value) services, such as information on housings or doctor’s practices reachable by public transport. In such cases, providing connection information via API is not always sufficient. 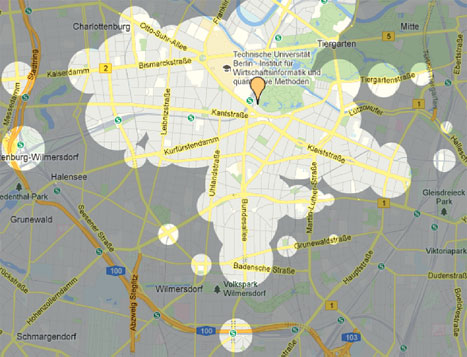 In order to make correspondingly more complex (added value) applications possible, it is necessary to have readily accessible and machine-readable transport data (packages) going beyond the API. The intention – as required as part of ”OpenData” – is to make this data available to everybody free of charge in a simple manner.

Berlin is a pioneer in the provision of such open data – an OpenData Initiative has been founded here, which includes crucial support from the Senate Administration for Economics, Technology and Research (SenWTF). As part of the ”ServiceStadt Berlin 2016” project, the Federal Secretary Committee for Modernisation of Administration has launched the project “Von der öffentlichen zur offenen Verwaltung“ (From public to open administration) and specified that administrations and provincial offices are to make their diverse data available on an active basis. This also includes information on the PT. In order to comply with this, the SenWTF together with Berlin Online Stadtportal GmbH has launched a Data Platform (www.daten.berlin.de), in which various official data is to be freely available for the purpose of being integrated into meaningful services. This form of data retrieval will open up a wide range of possibilities. The VBB is also contributing to the Data Platform by making its timetable data available in GTFS format.

Moreover, in collaboration with the SenWTF, Berlin Online Stadtportal GmbH and the Open Knowledge Foundation (OKF), the VBB presented an Entwicklertag (Developers’ Open Day) at the end of November, at which customer-oriented local public transport issues were raised and discussed with creative and committed programmers, web designers and OpenData enthusiasts. As a result, ideas were created for new, innovative services for local people and tourists in the form of mobile and web-based applications.