The pass NAVIGO has been in use since ten years, today it represents the key for mobility for nearly six million commuters in Ile de France Region.

To accompany the upgrade to NFC technology of the smartcard and mobile phones, pass ‘NAVIGO’ enjoyed a new design from the well known designer Philippe Starck who graciously volunteered for the work “[…] when STIF asked me, I didn’t hesitate to accept. To me being a citizen means also that talents of individuals be requested to serve the community1’ says Philippe Starck. In fact designer Starck project was to raise the prestige of this ordinary object of daily use although not trivial so that citizens living in the Region Ile de France so called Franciliens “be proud of their card [pass Navigo] as well as of the value of common interest that [public] transport enshrines”.

The Franciliens are continuously exposed to the branding of the public transport system, be it on the vehicles, at bus stops, at metro stations, on the network maps and therefore very familiar with the pass ‘NAVIGO’. It is the responsibility of STIF to bring consistency in the branding activity at regional level, making sure whatever the place in Ile de France the signals are the same and belong to the transport network system of the region.

The second generation pass ‘NAVIGO’ based on ISO 14443 type B technology (as opposed to type B’ in the first generation) compatible with NFC phones will allow a broader use of the smartcard with new applications notably to reload the pass NAVIGO from a NFC cell phone.

The second generation pass ‘NAVIGO’ will be introduced from 1 January 2013. 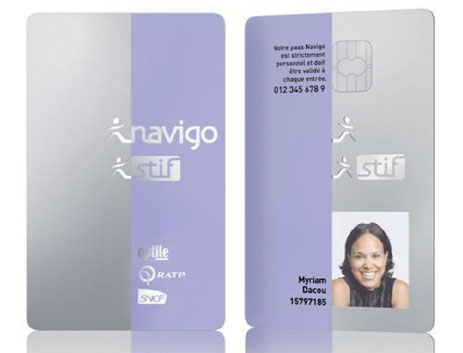 * Navigo classique is the pass most used where owners are registered on a client file. As opposed to the Navigo découverte where there is no inscription on a client file in order to respect privacy.