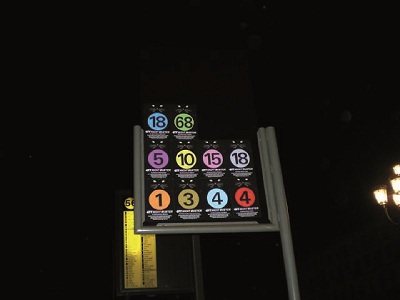 The night bus service in Turin was first introduced in 2008. The network consisted of 10 bus routes and the city hub was the beautiful Piazza Vittorio Veneto (one of the biggest public squares in Europe, 40.000 square km wide) which has become in the last years the heart of the city nightlife. The service was planned by AMMT (Turin Public Transport Authority) based on the following guidelines :

A particular attention was paid to the communication campaign : the new brand NightBUSter was created (which contains the words Night and Bus). It has an eye-catching logo resembling to the head of a cat whose whiskers represent the bus routes with their own different colors and the nose represents the central hub-terminus. 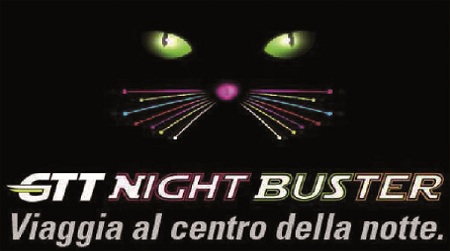 A slogan was also created : Viaggia al centro della notte. It means literally “Travelling in the middle of the night” : the word centro means “middle” but also “city centre”. A promotional video clip has been created and published on YouTube.

The first NightBuster network in 2008 was limited to the main city boundaries. The idea was to optimize the use of rolling stock and personnel by employing one bus and one driver shift for each route. Therefore the route length was designed to allow completion of the round trip within 1 hour. Despite this project constraint the service reached all the farthest neighbourhoods of the main city.

The trend of demand has been monitored since the beginning :

The increase in demand is 38% in the second year of operation and a further 30% in the third year.

Partial summer network extensions had been planned in 2009 and 2010 with a good demand response.

In the summer 2011 a new extension has become operational : as a result 11 bus routes serve the main city and 22 municipalities. Furthermore, for the celebrations on June 24th (San Giovanni, the day of the patron saint of Turin), AMMT planned also a suburban rail extension with special trains departing after midnight from Turin to allow people who took part in the celebrations (especially the fireworks) to use public transport and avoid the traffic jams.