By 2013 Source London will have at least 1,300 charge points, more than the number of petrol stations currently in London. This will ensure the infrastructure is in place for significantly more people and businesses to buy an electric vehicle from the expanding range coming to market. 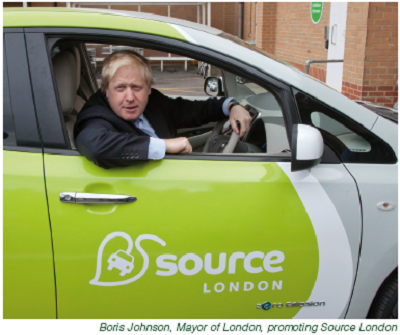 Annual membership of Source London is £100 (€112), enabling card holders to charge up at any Source London point as manytimes as required. Charge points are located on streets and in carparks and are instantly recognisable. Users simply touch their membership card to the reader on the charge point and then plug in their vehicle to charge. Source London is also working closely with other regions to help drive the creation of a UK-widecharge point network.

Source London is a significant element of TfL’s work to support the Mayor’s aim to make this city the electric vehicle capital ofEurope. The Mayor has a strategic target to work with a rangeof partners to deliver 22,500 workplace charge points by 2015– in part supported through a provision in the city’s land use strategy,the draft London Plan, for developers to include work-place charge points in new car parks. The Mayor has also granted electric vehicles a 100 per cent discount for the congestion charge in London.

Source London consists of a growing consortium (led by TfL) of public and private sector partners including:

Anyone who owns an electric vehicle is eligible to register for Source London at: www.sourcelondon.netFor more information: www.tfl.gov.uk