The public transport systems in the 3 largest metropolitan areas in The Netherlands are facing severe budget cuts starting 2013. As part of a national government program of public expenditure cuts of around €18 million, the Dutch government has imposed a €120 million cut on the budget available to Amsterdam, Rotterdam and The Hague for transport and maintenance of transport infrastructure. In the case of Amsterdam this could lead up to a decrease of services of up to 40%.

Stadsregio Amsterdam has calculated that some tram routes and many bus routes will have to be curtailed or even cancelled. This could result in a reduction of the tram and bus networks to mainly trunk routes.

According to consultants assigned by the Minister the maximum that can responsibly be economized by a higher efficiency of the transport operations is about €8 million per year. That does not even come close to the imposed cutbacks that The Hague assumes as feasible, provided the Amsterdam PT (Public Transport) concession for bus tram and metro is tendered out.

For 2015-2018 the annual cuts in Amsterdam PT will have to result in some €70 million to be achieved on a level of expense of €122 million for running cost, €94 million for infrastructure (maintenance) and €19 million for social safety. The minister has alleviated this cut somewhat by compensation of €23 million for the 3 cities, €10 million of which is intended for Amsterdam.

Even with these reductions the government budget cuts of €70 million for Amsterdam alone seems unachievable. Survey carried out by Stadsregio has indicated that this could entail the cancelling of 3 of the 16 tramlines and 25 of the 44 bus services and the curtailing of 4 city bus routes, in order to reach a saving of €33 million by the end of 2015. A raise of fares of 15 percent could yield some €15 million additional budget, even though a fare raise would demand the cooperation of 16 different regional authorities across the country.

Stadsregio considers the imposed cut backs as unrealistic and a major intervention in urban PT that will have adverse impacts on accessibility, quality of life and on economic recovery. The Executive Board believes last year’s directly award of the urban transport concession to GVB should be respected until 2018. In that contract running costs have been reassessed based on market conformity, yielding to a €28 million less expenditure.

The overall cutback of €120 million for the 3 greater cities is linked to the general obligation to tender, becoming effective by January 2013. The obligation adds on an overall cutback on transport budgets of 5 percent nationwide and the abolition of annual price compensation. 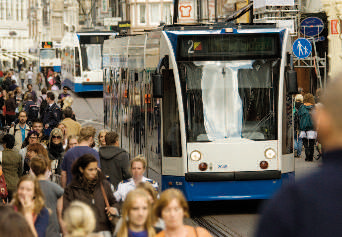 If services become less frequent, fewer passengers will expect to travel with PT. Users in the city and people coming from outside to city centre depending on bus tram or metro to reach their destination will have to seek alternative modes of travel (cycling, car).

Initially weaker bus routes will be curtailed or cancelled, sometimes routes will suffer from lower headway or fewer stops. Fare box revenues are likely to drop and provide for a decrease in cost coverage. To which extent service levels are actually expected to be lowered becomes clear by December 2011.