ZTM a European actor of importance

On July 1, Poland took hold of the Presidency of the Council of the European Union. The Presidency, which lasts six months, is a tremendous challenge and, at the same time, a splendid opportunity to promote both Poland and the city of Warsaw. The Public Transport Authority ZTM, based on the cooperation agreement with the Ministry of Foreign Affairs, has been admitted to the elite “Friends of the Presidency Club”.

ZTM associates with the event A special Warsaw City Pass for passengers of the public transport services has been issued by ZTM after organizing a contest for students to design a unique Pass that associates with the city and with Poland’s membership in the European Union EU. Also a special issue of the iZTM monthly has been developed devoted to Poland’s Presidency of the EU.

A valued and appreciated partner in Europe ZTM’s cooperation with European public transport operators through EU financed projects is beneficial not only to ZTM or Poland, but also to the whole transport sector, it works both ways. The transfer of knowledge from ZTM development and achievements to other transport authorities is also remarkable, Halina Rakowska, the coordinator of EU projects at ZTM says “We are among the leaders” (left on the photo).

Hans-Werner Franz, CEO of the Berlin-Brandenburg Transport Authority (VBB) and President of EMTA (second from right on the photo) was a key speaker at the seminar. 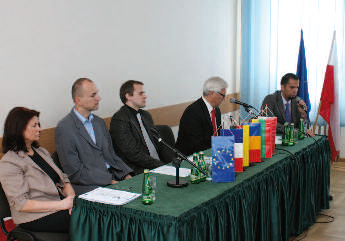 Remarkable good practices and implemented measures from Berlin-Brandenburg, Paris-Ile de France, Vilnius and Bucharest aiming at facilitating the development and efficient organization of transport services were debated as source of inspiration.

Among such practices were negotiating long-term contracts and organising tenders for transport services, as well as integrating ticketing systems in metropolitan regions. Moreover, solutions implemented by the CAPRICE project were presented. The first one was an Internet-based public transport routing system introduced as a pilot project in Warsaw as a result of a cooperation between ZTM and VBB. The second was the draft of a long-term contract for transport services that Bucharest Town Hall is about to sign with a local carrier. As a matter of fact, ZTM experts brought considerable input in the preparation of this document as it is largely based on agreements signed with Warsaw’s local carriers.

The “Good Practices Guide” will be available for project participants, as well as for other cities. It is worth noting also that the project implemented by ZTM in cooperation with BVG operator in Berlin “New quality of services – young personnel as a vehicle for change in the public transport system” has been nominated to the group of 31 best projects in Europe, implemented in the period 1995-2010 under the Leonardo da Vinci Programme of the European Commission DG-Education and culture, within the framework of the “Training for mobility publication”. ZTM’s was the only Polish project shortlisted among thousands, “the greater the honour” stresses Halina Rakowska.