“I am glad to say, that the public transport system in Warsaw is consistently modernised,” says Leszek Ruta, Director of ZTM, the Warsaw Public Transport Authority.

A city payment card and internet-purchased tickets are the paramount innovations ZTM has introduced in 2010. More and more tickets are also bought via cell phones, and the number of ticket vending machines in the streets and on board the vehicles is constantly growing.

First in Poland and Europe Warsaw is the first city in Poland to issue a City Payment Card. The option to encode personal long-term tickets on a payment card issued by the City Handlowy Bank was made available to the customers in October 2010. The introduction of this service has significantly increased the number of places, where one can get personalised pass for public transport system “off-the-shelf”. At the Central European Electronic Cards Conference, the card issued by ZTM and Citi Handlowy Bank was awarded the title of the most innovative payment card in Poland in 2010.

Fast and comfortable Currently, paying fares for passengers of public transport in Warsaw is quick and easy:

Their installation is required in the call for tender for transportation services. There are over 120 buses with on-board ticket vending machines in the streets of Warsaw. Travellers will also find them in the 13 new SKM trains purchased to service the lines from the Chopin Airport in Ok´cie, as well as in all the 186 ‘Swing’ trams ordered by Tramwaje Warszawskie (Warsaw Tramway company).

They sell single, time-limited, short-term and long-term tickets. The machines accept coins and give change. The number of stationary vending machines keeps growing – there are over 230 of them in Warsaw. They are installed in underground and in regular railway stations, at the main transfer nodes and crossroads, as well as in suburban municipalities.

Better informationPassenger information has also improved. The web-page of ZTM offers two journey planners: Jakdojad´.pl (“How do I get there”) and HAFAS (tested under the CAPRICE project). Timetables on bus stops are plainer now, and dynamic displays inside the vehicle show the bus route.

ZTM cares about precise passenger information. In the new draft timetables for the bus service, which relate to the trams’ timetables, the first column gives the travel time (in minutes) from the stop to the following ones along the route, as well as the travel time to the current stop from preceding ones, beginning with the terminus. 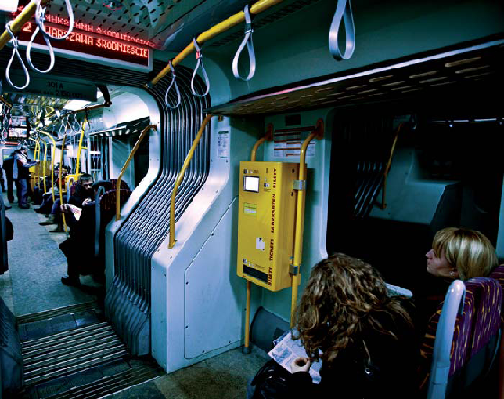 Electronic displays inside the vehicle have become a standard piece of equipment in the new public transport buses and trams. The dynamic display located by the middle door shows the route; the part already travelled shows grey. Outside displays give even more information (about the terminus, the bus going to the depot, or changes in the route).

A light version of the ZTM web-page, adapted to cell phones requirements, has also been put up. It allows to check the timetable within seconds. The Public Transport Authority in Warsaw consistently develops a modern and safe transportation network. Its goal is to create an integrated and passenger-friendly public transport system.