The AMT will thus be able to outfit the centre with the facilities necessary for the maintenance of its current and projected fleet of commuter trains in keeping with industry standards, which should make for increased service reliability as a result of enhanced rolling stock maintenance.

“The government of Canada considers that its contribution to the project is an investment in our future. Public-private partnerships (PPP) are an innovative approach that enables us to build better public infrastructure and provide taxpayers with an improved cost/benefit ratio,” stated Minister Flaherty.

A partnership to improve services The construction of the Lachine commuter train maintenance centre, is “a long-term solution to issues associated with public transit development in the greater Montreal area. Not only will it improve the system’s reliability and passenger safety, but it will also create jobs,” explained Senator Smith.

“In the wake of investments extended by our government for the purpose of improving public transport services, the financial support announced today will enable the AMT to extend the useful life of its rolling stock, to streamline operating expenses and to optimize the service it offers. The Lachine Maintenance Centre truly reflects the long-term vision we have for the metropolitan area and the impetus we want to give it in terms of mass transit,” pointed out Minister Hamad.

Once built, the Lachine Maintenance Centre will be instrumental in the timely maintenance and future development ofcommuter trains. During the daytime, between the morning and afternoon rush hours, the trains will be parked at the Lachine Maintenance Centre, not far from the Lucien-L’Allier station, in readiness for the evening rush. The AMT willmake good use of this time to conduct inspections, scheduled maintenance and minor repairs.

“In only fifteen years of operation, the commuter train network’s ridership has more than doubled. The AMT accordingly has to plan for the maintenance of its commuter train fleet, which is on track for significant growth—from 217 units today to over 300 by 2015. Given these growth objectives, the AMT is duty-bound not only to purchase but also maintain these major acquisitions.

Commuter train reliability is largely contingent on the commissioning of maintenance centres like this one. In the final analysis, every one of our train commuters stands to gain from such new facilities”, concluded AMT President Joël Gauthier. 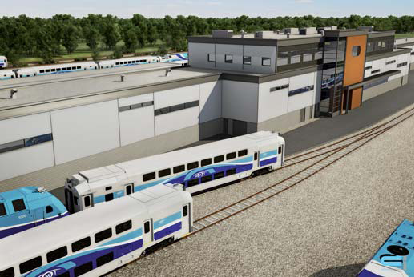 State-of-the-art facilities The AMT’s facilities will feature the latest in equipment and machinery, which is just the ticket for efficient, dependable and less costly inspection and maintenance services. The installations of this inaugural maintenance centre will boast leading-edge technology.

The Centre will have room for 11 trainsets in its outdoor yard, as well as an indoor inspection shop that can accommodate an entire trainset, a major maintenance centre for three locomotives and three double-decker cars, and a fully automated train-washing station.