The successful combination became possible owing to the agreement of the ZTM with the Academy of Fine Arts (ASP) in Warsaw. It was meant to enable young novice artists to present their works on the grounds of the Mlociny interchange hub. In return, the ZTM gained factual support on works conducted over the graphic design of organized information and educational campaigns.

Public space used to be a very popular way of presenting art. In time, art was transferred to galleries and museums. The Park of Art was supposed to rediscover the space of large metropolis as an ideal place for displaying contemporary art. The Mlociny hub meets these conditions. There are sites for artistic installations, big sculptures or audiovisual shows in its external surroundings. Purpose is to let hurrying commuters, and there are over 30 thousand of them every day, merge in the world of art and slow down.

The Park of Art opened on 15 June 2009 with the exhibition “Public Transport in the Lens of the Students of the Academy of Fine Arts” of black and white photographs from a competition organized by the ZTM Warsaw and the Academy. The photos incorporated in the sidewalks to give an original perspective were displayed in the patio of the Mlociny hub, an easily accessible space opposite the exit from the underground train station. The inspiration came mainly from the students visit to the tramways depot in Mokotów and Praga. The photos, composed of shades of white and grey, full of the play of light and shadow, presented everyday life of a depot and of the city, they showed people at work, people travelling, communication details, and reality seen through bus and tramway windows. 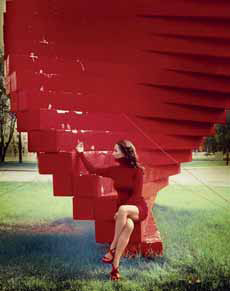 Young sculptors also showed their works. Some using deliberately the technique of black and white photo, presented models in poses stylized to look like sculptures. Others displayed their spatial constructions made of polystyrene foam in the Mlociny interchange hub. A photo session of a popular singer Justyna Steczkowska was also organized among these polystyrene sculptures.

In fact the contribution of ZTM Warsaw to the promotion of culture through public transport doesn’t stop there. Other recent activities range from organizing design contest to promoting film festival or supporting literature. ZTM organized a contest for a universal logotype for future marking municipal means of transport, in collaboration with the Bemowo district. Participants were numerous attracted by the prizes, an invitation to the highly popular Sonisphere rock festival (featuring Metallica and AC/DC). Contributions were very diversified from hand made drawings to professional designers. The jury awarded the logotype representing a mermaid (the symbol of Warsaw) playing the saxophone.

The ZTM Warsaw also participated in the promotion of the third edition of the Soviet and Russian film festival Sputnik. The event celebrates Russian cinema masters and notably the recent winner of the “Window to Europe” festival, the film “Stone Head” staring the famous Russian boxer Nikolai Valuev. Advertisement posters were placed in all the public transport vehicles. 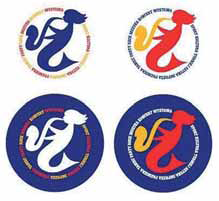 And last but not least, ZTM supports literature in promoting for example the novelist Tomasz Konatkowski for his novel “Nie ma takiego miasta” (There isn’t such a city) the third book of a series of thrillers featuring a Chandler–like detective solving crime enigmas in the setting of daily life and realities of Warsaw city. At times passengers received leaflet containing parts of the novel. Besides, to celebrate the World Book Day on 23 April, ZTM Warsaw, Nokia Poland and Audioteka.pl invited passengers on board “audiobuses” to share pieces of literature from Wladyslaw Reymont to Paulo Coelho to fairy tales from Andersen, read by famous Polish actors. No doubt passengers must have enjoyed the trip.