With nearly 22% of the annual ridership of commuter trains the Dorion-Rigaud line was in great need of high capacity train sets. The double-decker cars are in operation since 25 May 2010.

The first of the five commuter train lines to be delivered was Mont Saint-Hilaire (see EMTA News n°38 "A new era for commuter trains"), Dorion-Rigaud is the second, two additional lines will follow before the end of the year. 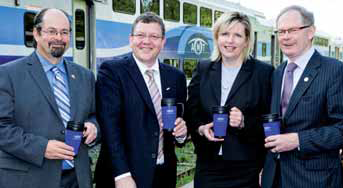 “This is excellent news for the West Island that is experiencing significant population growth and a daily congestion on its road network. The commissioning of this new rolling stock perfectly meets Quebec’s government goals as defined in its Politique sur le transport collectif des personnes (mass transit policy)” have stated the three government representatives on the opening day 25 May.

In concrete terms, the commissioning of these new acquisitions represents improved comfort, reliable service and increased general capacity. With the deployment of these new passenger cars, the seating and total capacity of the Dorion-Rigaud line, second in terms of ridership, will increase by 40%. From a general perspective, these 160 new cars will increase commuter train capacity by 70% on all five commuter train lines, by adding almost 43,000 additional commutes per day.

Each car has 142 ergonomic seats and features a spacious intermediate level between the upper and lower decks with benches and a two-way communication system between passengers and the crew. Each train-set will have bathrooms, located in the cab car.