Contractual frameworkOn January 1st this year, the local railway service operated by Renfe Rodalies was transferred from the Spanish Central Government to the Government of Catalonia. 197 trains and around 900 workers provide the service. This is the first time that a regional government in Spain has taken over functions that have been, until now, exclusive to the Central Government.

To manage the transfer, the Catalan Government – Renfe Operadora Mixed Coordination and Control Body was set up, with four representatives each from the autonomous Government and the railway operator. Moreover, the Catalan Government has appointed the technical director of Barcelona Metropolitan Transport Authority as technical coordinator of the Rodalia local railway service. The powers transferred concern management, regulation, planning, coordination and inspection of the service, as well as setting the fares. 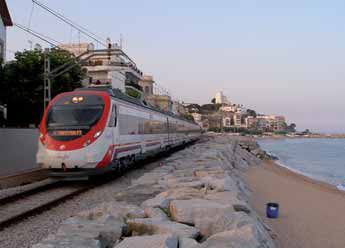 According to the transfer agreement, the Catalan Government undertakes to continue with the current contract-programme signed with the Spanish Government until 31 December 2010. After that date, the Government will be free to negotiate a new contract for the 2011-2015 period or to appoint a new operator from 2012.

For its part, the State will assume the entire Renfe Operadora deficit, which is estimated at around 117.2 million euro per year. This amount includes operating loss, depreciation on investment and financial costs. The agreement specifies that the Catalan Government will assume no losses sustained by Renfe Operadora either in 2010 or in the previous years.

When the current contract-programme expires, the Catalan Government will be free to renew it with Renfe or to appoint a different operator to run Barcelona local railway services. Whether or not Renfe continues to operate the service, the State Administration will transfer to the Catalan Government an amount equivalent to the deficit generated by the provision of the service.

The Catalan Government may establish different quality levels and its own fare policy. It may also modify the standards of service from those agreed between the Spanish ministry and Renfe (increased frequency, capacity of trains, etc…).

Actions carried outOver the first half-year since the service was transferred, progress has been made over four lines of action:

As a consequence of these improvements, the average user quality rating has risen from 6.24 to 6.31 in the six months since the Catalan Government took over responsibility for operating the system.