David Brown, Director General explains in the following lines why SYPTE engages with the public on its Vision for Bus Services.

“More than 80 per cent of South Yorkshire’s public transport journeys are by bus, or to put it another way, one in six of all journeys into town are made in this way. That is why maintaining a high standard for our bus services is so important to delivering a high-quality public transport network.

But while buses remain the most popular form of public transport, the number of people using buses has only been growing slightly, mainly due to the free travel for the elderly available under the English National Concessionary Travel Scheme (ENCTS), whereas the numbers of people travelling by car has been increasing more significantly. This has led to more congestion, which slows journey times for everyone, as well as making the county’s economy less efficient.

Here at South Yorkshire Passenger Transport Executive (SYPTE) we believe that we can encourage even more people back onto the bus network by delivering significant improvements to its quality and reliability. That is why we have drawn up proposals for an overhaul of bus services in South Rotherham and Sheffield which we believe will offer these much sought-after changes.

Our plans propose better buses, a simplified fare structure and a more stable network, with fares and route changes happening no more than once a year. A completely new fleet of low-floor buses would feature greener, cleaner engines and CCTV on all buses.

There would also be more real-time information at key bus stops. We have been working with our partners for some time to develop these plans and have been undergoing public consultation on the proposals since early July. The South Rotherham and Sheffield consultation follows related activity recently completed in Doncaster, where more than a thousand local people responded to similar proposals for the town’s bus network, during which SYPTE held a series of on-street exhibition days and undertook a comprehensive direct mail campaign to residents.

In one of the best responses to any consultation in the region in recent years, it was found that 57 per cent of Doncaster bus users were dissatisfied with the quality of their bus service, and 61 per cent were dissatisfied about reliability. Unsurprisingly, regular bus users ranked frequency, punctuality and reliability as their top three priorities. SYPTE is currently consulting with operators about the best way to deliver the vision in Doncaster.

This could entail voluntary agreements, Statutory Quality Partnership Schemes or a franchising option known as Quality Contracts. In South Rotherham and Sheffield, we are talking to the bus operators and considering legal options to explore how this vision can be made a reality. We believe it will build confidence in the bus network, improve passenger satisfaction levels and would encourage more people to use the bus. That would mean less congestion on our roads and contribute to a better quality of life for us all in South Yorkshire. 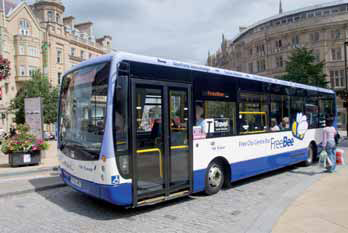 We believe our proposals are achievable and would make a real difference to the quality of bus services in our region. But, as always when we undertake any major scheme, we want to know what the public think, so that we can make the proposals as responsive to people’s needs as possible. That way, we will be well-placed to deliver the bus network South Yorkshire residents deserve.”

This major piece of consultation has been carried out by David Young, SYPTE Director of Customer Experience.

SYPTE’s proposals for the South Rotherham and Sheffield bus network are available to view at www.busvision.co.uk