Consorcio Regional de Transportes de Madrid CRTM winner of the Award for Outstanding Innovation in the Public Transport for the Madrid Interchange Plan. 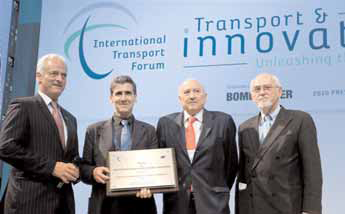 ITF explained the selection of CRTM with the following comments : “Transport interchange stations are a crucial part of the public transport system, which allows travelers to make a wide range of trips both comfortably and pleasantly. It is more and more evident that modal integration plays a fundamental role in the transport system success. The fact that more citizens have abandoned private transport to use these interchange nodes serves as proof that the old concept of railway and public bus stations is no longer valid in today’s world.

Madrid Interchanges Plan is the culmination of this unification process between the interchange points of the intercity bus lines and the Circular Metro line. With the adequate construction and improvement of the new transport interchange stations a modalinterchange network has been organized around Madrid’s entrances in relation to the highways that access to the city and the circular underground Metro line. Madrid Region has seven important highways that connect the region with Madrid City. In each entrance an interchange station has been built up connected with the Metro underground network and the metropolitan and urban bus lines.

In any case it is an extremely ambitious plan, nothing like it exists in no city in the world. Other cities have been able to build one interchange station, but none has built a network of interchange stations that can move more than a million users a day and contain the entire flow of passengers accessing the city from all its entries.

Madrid Transport Interchange stations are an example of innovation and a global benchmark, being the model exposed in most of transport conferences for broadcast. In particular about :

For more on the Madrid Interchange Plan, contact : Javier Aldecoawww.ctm-madrid.es