“Comparative study of the public transport financing and of the fare policy in different metropolitan areas of Europe”–realised by ATM Barcelona.

On 24 February 2010, the Secretary for Mobility of the city of Barcelona Manel Nadal, opened the conference to present the comparative study of the financing of public transport and of the fare policy in different metropolitan areas of Europe, promoted by the ATM’s Executive Committee. The study was carried out by the company Deloitte which received collaboration from the Madrid Regional Transport Consortium (CTM), the Paris Ile-de-France Transport Syndicate (STIF), the City Region of Amsterdam (STA), the Berlin-Brandenburg Traffic Association (VBB) and the Ministry of the Region of Brussels-Capital (MRBC) hereby referred to by the name of the main city.

This work carried out a comparative analysis of the organization of public transport systems, their financing and the fare structure in the areas of Amsterdam, Berlin, Brussels, Madrid, Paris and Barcelona between the years 2004 and 2007.

The conclusion of the study is that there are different organizational models of the public transport system depending on the strategic and operative degree of responsibility of the public authorities and of the competences they are granted, but with characteristics that are common to all of them.

Analysis of the mobilityThe use of non-motorized transport means (bicycle or walking) is very significant in most of the European cities analysed, with the maximum score in Barcelona area. With respect to public transport, Amsterdam and Madrid are the metropolitan areas where it is most used, while in Berlin, Paris and Barcelona it scores 20%. In the cases of Berlin and Paris, this is due to a wider use of the car, while in the case of Barcelona, more people move around walking.

On the other hand, Brussels is the area where more travelling by car is recorded, sometimes it amounts to 60% of the journeys.

The demand and the fare systemIn the last few years, there has been a significant increase in the population’s mobility and in the use of public transport. In this sense, if the demand for public transport is compared with the population’s evolution, it shows that the increases in the demand are higher than the demographic growth. The areas where the most important variations were recorded were Brussels, followed by Barcelona and Amsterdam.

On the other hand, the level of use of each transport ticket in the different areas varies, depending on the established fare system. So, the most used tickets are the monthly season tickets, except in the case of Barcelona where the ticket with the highest degree of penetration is the T-10 pass which is used in over 50% of the cases.

With respect to the prices of the tickets in the year referred to in the study (2007), the 10-trip multi-trip pass is clearly cheaper in the metropolitan areas of Madrid and Barcelona. It should be pointed out that, in all the areas analysed, this is an integrated ticket, except in the case of Madrid.

For the purposes of comparing the evolution of prices, the current fares in the different cities analysed are indicated below. 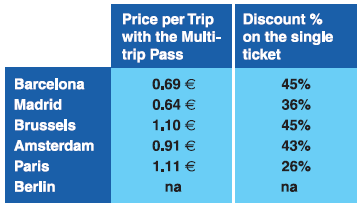 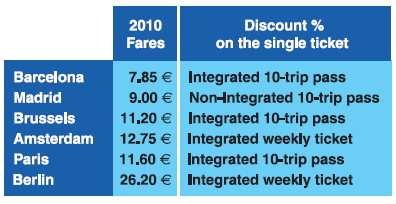 Financing the systemIn all the areas analysed there is a strong component of public financing (subventions) in the cost structure of the public transport system. The operational costs covered by the fare revenue amount to less than 50% in all metropolitan areas.

In the case of Paris Ile de France the transport tax levied on companies with more than 9 employees stands for a significant amount alongside the public administrations subventions. The changes in the origin of public subventions in the period analysed, generally speaking, shows the loss of the state’s participation in financing transport, which tends towards a heavier burden on the regional and local administrations.