The scenario of transport lessons prepared in a simple and practical manner by the staff of ZTM, will teach youngest pupils how to access safely the bus or the tram stop, get on and off the vehicle, behave properly in public transport as well as at bus and tram stops, use the ticket validating machines, the “next stop on demand” buttons or the door opening buttons. 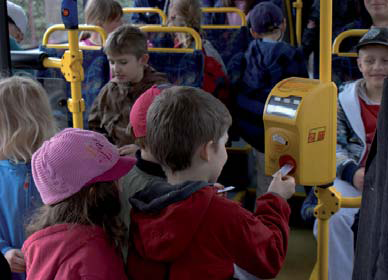 A successful test had been conducted on pupils of the elementary school N° 77 in Warsaw Bielany accompanied by their tutors during the Public Transport Days in September last year. Tutors and children expressed their great satisfaction and acknowledged the excellent preparation of the instructors –four employees from ZTM. “The campaign of ZTM is very helpful”– says Honorata Waszkiewicz, responsible for the implementation of several national and Warsaw based educational programmes.

In 2010 ZTM plans to regularly deliver such classes together with the Warsaw Education Office and the largest provider of transport services in Warsaw – Municipal Bus Company (MZA). Early April a series of 21 classes are organised by ZTM for first grade students. This initiative is part of “Warsaw Educational Line” programme i.e. a series of educational classes on a tram addressed to pupils of elementary and secondary schools. It has been operating in the capital since December 2009. The campaign is organised by the Public Transport Authority of Warsaw and Warsaw’s Police Headquarters.