Last October 2009, the Regional Ministry of Public Works and Transport inaugurated the newly refurbished metallic bridge of San Juan de Aznalfarache (west of Seville) dedicated to public transport and cyclists. It will allow more than 300 buses to cross daily the Guadalquivir River, cyclists and pedestrians but also taxis and school services will follow. 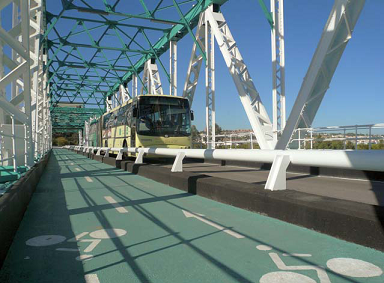 The project which amounted to €4,8 mio aimed to achieve the restoration of a metallic bridge of historical importance while offering an alternative route to connect the Aljarafe with the city of Seville. The point is to improve the metropolitan public transport journey time by diverting bus services from the traffic of private cars on the bridges of Juan Carlos I and Reina Sofia. The time saving is estimated between 5 and 10 minutes in average for the 6,500 users commuting from the 10 municipalities of Aljarafe to Seville with the 8 metropolitan lines that are going to benefit from this measure.

The metallic bridge of San Juan as well as the railway bridge of Camas are part of the public transport reserved infrastructure respectively between Gelves – Seville and Camas – Seville, which fall under the Metropolitan Transport Plan of the Area of Seville.

The investment for the very impressive work of consolidation and restoration of historical heritage was co-financed with ERDF funds of the European Union as it meets the objective of "contributing to the reduction of disparities in development and living standards across regions and also the reduction of the less-favoured regions backwardness”.