In five years, public transit ridership jumps by 15%. Trips by car are down, a first since 1970. The results of the 9th Origin-Destination (O-D) study conducted in the fall of 2008 among some 66100 households in the metropolitan area of Montreal were released on 15 February 2010.

Trend reversalTwo particularly striking facts emerge from this study that reflect a reversal in a trend that has been constant since 1970. With a jump of 15% in five years, public transit ridership is now registering a modal share of 25%, while, for the first time in almost 40 years, trips by car have seen a drop of 1%.

“The 15% increase in public transit ridership in five years is concrete proof that the efforts to improve public transit services have borne fruit and are responding effectively to the evolution in the trip market declared Mrs Julie Boulet Minister for transport of Quebec.

“The latest O-D study has brought some very welcome results: the market share of 25% for public transit in 2008, versus 22% in 2003, and the reduction in the use of the automobile. These new data will help guide us in our longterm transportation planning”, continued Mr. Joël Gauthier Chairman Director General of AMT.

Use of modes of transportationDespite an increase in the number of cars (10%) and a slightly lower car occupancy level of 1.23 people per vehicle (1.25 in 2003), trips by car experienced a decrease of 1%, a trend reversal observed for the first time since 1970. It should be remembered that from 1998 to 2003, trips by car had experienced an increase of 5%. Non-motorized trips, by foot and by bicycle, also saw an increase of more than 11%.

“…In light of this success and in a context where the Quebec government wants to reduce GHG emissions* by 20% between now and 2020, the time has now come for the STM, with the help of the Quebec government, to redouble its efforts to improve the service offer and encourage even more Montrealers to join a Society in Motion,” declared Mr. Michel Labrecque Chairman of STM (Montreal transport company).

“In Laval, between 2003 and 2008, the population grew by 7%, and employment by 12%. But this study enables us, above all, to measure the effect of the opening of the three new metro stations in Laval on April 28, 20071. The impact of this extension is spectacular. Metro use by Laval residents has increased by 70%, which has led to growth of more than 30% in the use of all public transit (bus, metro and train). At the same time, automobile trips by Laval residents have dropped by 1%,” commented Mr. Jean-Jacques Beldié Chairman of Laval transport company STL. 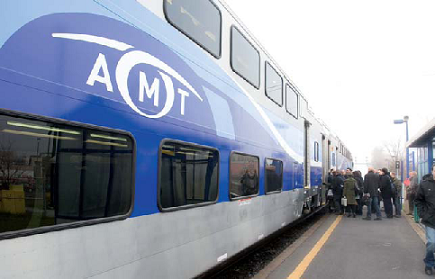 Population shift and mobilityWe see confirmation of the population growth over the last five years in the Montreal metropolitan area (an increase of 5% since 2003), with greater growth in the suburbs than in Montreal in both population and employment. “Travel in the suburbs is often associated exclusively with the car. However, the results of the O-D study tend to indicate that the model is changing. Public transit holds an ever-growing share, with 27% of the new rush hour trips on public transit being observed in the municipalities in the northern and southern suburban areas of the metropolitan area.

These increases, in the order of 40% and 50% respectively, clearly demonstrate that the public transit service offer in the suburbs is responding to a constantly-growing need, thus confirming the population trends,” stated Mr. Jean-Luc Labrecque President of the association of inter-municipal transport councils (ACIT).

The population growth since 2003 has resulted in an increase in trips during the morning rush hour on all forms of transportation. This increase is observed throughout the metropolitan area: 1% on the island of Montreal, 3% in Laval, 2% on the South Shore and 5% and 10% respectively in the northern and southern suburban areas. The reasons for these trips, estimated at more than 2 213 000 each morning, break down as follows: 51% for work, 29% for studies and 16% for other purposes.

The Origin-Destination study at a glanceThe O-D study deals with the characteristics of trips taken by people using all forms of transportation. It provides a profile of the mobility of residents, their work, study and recreational activities as well as the methods of transportation they use.

Conducted every five years since 1970, each successive survey covers an increasingly large territory. In 2008 it extended across the entire metropolitan area from the cities of Montreal, Laval and Longueuil to the northern and southern suburban areas, thus covering a territory of 8,200 km2 that includes 121 municipalities. This research, conducted via telephone interviews, surveyed 66 100 households in the metropolitan area.

Highlights of the 2008 Origin-Destination study can be found on the AMT site: www.enquete-od.qc.ca