Francilien is part of the rolling stock renovation policy of STIF the transport authority: 172 trainsets will be delivered within April 2015, they will allow the discard of 40 years old push-pull trainsets no longer able to meet reliability standards and passenger comfort expectations.

Francilien features innovation and leading-hedge technology. Car bodies are just 13.24m long but wider than usual (3.06 m), the extra 0.24m allowing larger seats and larger centre aisles which helps passengers getting around and finding a place. Open inter-car gangways give a view along the length of the train reinforcing the feeling of security. The LED lighting is a striking feature of this train, it offers the possibility of changing lighting effects and is much sober in energy consumption. Underfloor heating and air conditioning ensure comfortable temperature. 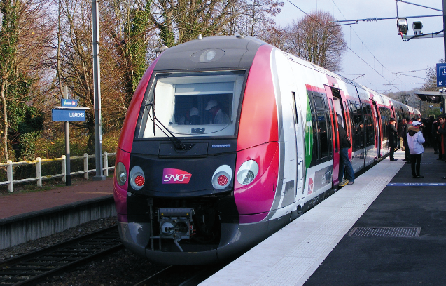 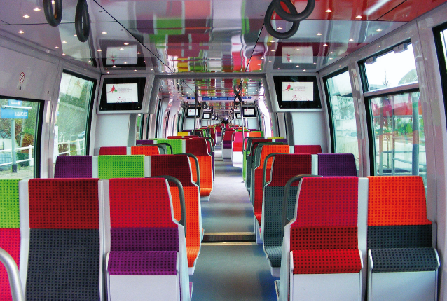 It starts with line Paris-Luzarches, the first line where Francilien enters service. Continuous studies are undertaken to extend the Francilien service on the east part of the rail network (Paris-Est) in July 2012 and on the west part (Paris Saint Lazare) in January 2013.

Besides raising platforms, works in stations consist of implementing beacons (to inform the train about the platform height inducing for example the unfold of the folding steps to accommodate lower platforms) and other necessary signing.

The introduction of the 172 trainsets is also an opportunity to reallocate according to the Rolling Stock Master Plan, trainsets still worth ten to twenty years more duty. In 2016, the whole fleet will be either new or recently refurbished. The SNCF double-decker cars will be gradually reallocated on the longer routes where passenger expect to travel seated as opposed to standing, while Francilien will be mostly dedicated to close suburbs routes where higher frequency provides for capacity.

Francilien design integrates the logos of SNCF (bright red) and STIF (blue and orange on silver) on a white coat background.

The purchase from Bombardier of 172 trainsets as firm order amounts to €2 bn, 50% paid by STIF and 50% by SNCF. Studies are pursued to evaluate further needs.