A new era for commuter trains in the Montreal Region :

It was at Bombardier Transportation’s plant in La Pocatière that the very first multilevel- type double-decker car was unveiled of the kind that will travel the Agence métropolitaine de transport’s (AMT) commuter train system this fall. This day -so eagerly awaited by the AMT and its customers- was described as historic by the President and Chief Executive Officer of the government agency, “Today we are unveiling the long-awaited fruits of our efforts.

These new cars are much more than just pieces of equipment. They inaugurate a new era for commuter trains in the Montréal region,” said Joël Gauthier. 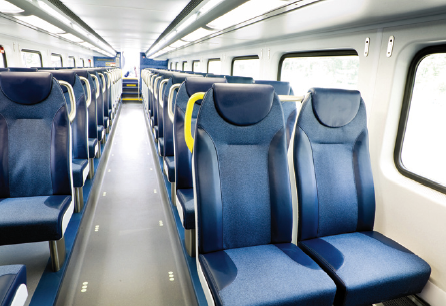 These 160 new cars will improve service quality over time by making it possible to :

These new leading-edge “multilevel” cars will improve comfort for commuter train passengers. Each of the 160 cars will be fitted with 142 ergonomic seats, a spacious intermediate level (fitted with benches) between the two decks, bicycle stands and a two-way communication system between passengers and the train crew. Every train will have a toilet, located in the cab car. As well, the cars will be more accessible for people with reduced mobility.

This ”historic” order for 160 cars was awarded to Bombardier Transportation in December 2007 and represents the largest investment in the history of commuter trains in Québec of $386,266,045, financed 75% by the Québec transport department. As promised, the cars will be gradually commissioned starting in late fall 2009, at a rate of one train set per month.

The AMT’s renewal of its fleet of rolling stock will continue with the arrival of 20 new dual-mode locomotives starting in 2012.