Passengers in South Yorkshire could be the first in the UK to take a continental-style tram-train under plans announced today by the Department for Transport, Northern Rail, Network Rail and South Yorkshire Passenger Transport Executive.

Tram-trains are greener than conventional trains as they use less fuel, have faster acceleration and deceleration rates; which offer passengers better journey times. They are also lighter which may reduce wear and tear on tracks cutting the need for disruptive maintenance works.

Passengers could see tram-trains running between Sheffield and Rotherham on the current freight route from Rotherham and then joining the Sheffield Supertram network at Meadowhall South.

The trial will assess the environmental benefits, operating costs and technical suitability of the tram-trains as well as testing how popular the vehicles are with passengers. These are the first steps in a process which could lead to more tram-trains operating throughout the UK. Rail Minister Chris Mole MP announced the plans on a visit to Meadowhall – where tram-trains will connect to the Supertram network. He said: "Tram-train is a new concept for Britain, but it has already proved a valuable addition to rail fleets on the continent. It provides seamless travel from rural and suburban areas direct into city centres, potentially cutting congestion and offering an alternative to short and medium distance car commuting.

"Adapting tram-train to the UK requires some testing, but while that is underway, people in South Yorkshire will have the chance to experience this new type of vehicle for themselves – and I hope they will tell us what they think of it.” 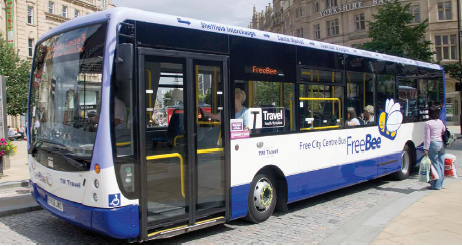 South Yorkshire PTE Director General David Brown said: “If we can overcome the technical challenges then tram-trains would bring huge benefits to the travelling public in South Yorkshire. They would widen the options available to those people travelling between Rotherham and Sheffield and the technology could eventually be used elsewhere in the UK too.”

Northern Rail will procure the new vehicles for the Rotherham-Sheffield operation, while Network Rail is investigating what works would be necessary to safely accommodate the vehicles on the UK heavy rail network.

The project partners are still planning to test tram-trains on the Penistone Line between Sheffield and Huddersfield via Barnsley at a later date after work concluded that, electrically-powered tram-trains are more economically viable for use in the UK than the diesel equivalent which was being proposed for trial on the Penistone line.