In 1986, the Madrid City Council launched a competition for the construction of two office buildings on premises located in the north of Plaza Castilla on each sides of the Paseo de la Castellana. As part of the planning duties imposed, was a new bus terminal to be built in order to better organize all the bus stops scattered around the square. The winner of the contest designed a twenty bus platform terminal perpendicular to Paseo de la Castellana which allowed transfer between metropolitan buses and some urban bus lines of the EMT (municipal buses of Madrid city), with the Metro station. The terminal was built in the middle of Paseo de la Castellana and above the underpass.

After the construction of the underground transport Interchange that opened in 2008, the area occupied by the surface bus terminal was cleared allowing to set all the city bus headways of the EMT lines. This action improved the transfer between the EMT lines and the underground station. But this operation is not the only one around the Plaza de Castilla: Madrid Underground (Metro) started works for improving and expanding the north Metro hall , making accessible the whole station through the provision of lifts and escalators. Madrid City Council also began a project for the refurbishing of the surrounding sidewalks of Plaza de Castilla and the settlement of a milestone designed by the architect Santiago Calatrava in the centre of the roundabout. By removing the buses from the surroundings of the square, sidewalks have expanded and traffic lanes have been orderly redesigned, making the square friendlier for pedestrian and better organized for the private vehicle.

The objective of the new surface City Bus Terminal is to improve the transfer conditions and the waiting time between public transport modes. Moreover the bus platforms layout in indentation allows to create, a safe and comfortable public transport for users comparable to the underground terminals. 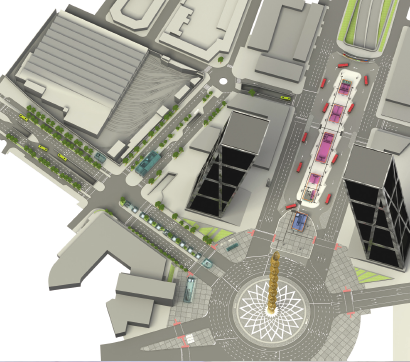 The City Bus Terminal has two islands, around which the bus platforms are placed in a way that allows to differentiate the passenger area from the bus circulation area. A high metallic structure of 28 meters wide and 220 meters long acting as a canopy covering both islands, protects users from rough weather. Access to the Metro network and the underground interchange station is given through two underground halls situated in each island. There are also several spaces in the islands that serve as waiting areas and service area, they are key points to improve the security of the terminal.

Actually the Terminal generates around 75000 trips /day from the EMT city buses. Main destination are either the new urban developments of the north of Madrid or other points of the capitale city such as Atocha (south) Arturo Soria (east) etc.. In the island configuration, the buses have entry and exit from north and south of the Terminal, circulation is clockwise, around the passengers area. Arriving buses can easily unload passengers near the hallway leading to both Metro and the underground interchange station. The design has sought to minimize the possible conflicting points in the bus circulation. In the most southern part, an exclusive platform for bus line 27 is dedicated. Operated with articulated buses, line 27 represents one of the increased demand of the network.

By moving around about 75.000 passengers per day, City Bus Terminal becomes one of the biggest bus terminal in the world. In the design of the terminal, basic principles to ensure transfer between different transport modes have been taken into account. The island configuration allows to provide pedestrian routes with minimal interference with the movement of buses. The origin of passengers is varied, 21% comes from the street, 13% comes from any of the 38 intercity lines, a 30.8% of other urban routes, and the largest percentage, 32.2% transfer with any of the 3 underground lines.

In terms of design, the terminal adopted the same kind of solution as the underground transport interchange to which it is linked. A central island of 157 meters long and 20 meters wide, around which there are 13 platforms for the headways of the city buses, two for intercity buses and 3 for unloading passengers. In the center of the island there are 4 block-units built for different use. The furthest south is aimed at informing users, operators’ service and mainly for Underground access. Central block-units are for customer service, cafes and shops. The northern block-unit is dedicated to retailers and installations facilities The other island is justified to prevent the incursion of buses in the Plaza de Castilla roundabout, on this island is the exclusive Underground access block.

Special care has been given to improve the quality of the passengers travel experience in relation to the successful amenities offered in the underground transport interchange and especially dynamic information on various screen boards, air-conditioned waiting areas, specific ergonomic seats etc… to the point that all these items will serve as reference for other bus terminals in urban areas in the future.