It is always important for us to keep in mind what is our main task : it is to care about the passengers and that they feel safe and secure in the local public transport system. That is why the system must be of high quality, since the level of quality determines whether somebody uses the bus or train in everyday life or not. First of all, quality means high punctuality and frequency of the transport system. Secondly, the means of transport, stops and stations have to be clean. And, last but not least, the system has to provide adequate information to the customers. But, as a basis, without passenger safety, the other issues become irrelevant.

One could have read about a great safety problem in Berlin in the international newspapers : Berlin’s commuter train “S-Bahn” has been operating on a very low level since the end of July. The reason is that the S-Bahn management changed their maintenance policy from careful prevention to simple remedy. They reduced the staff and the maintenance capacity significantly. This evolution did not occur without any reason : the Deutsche Bahn management wanted to go public at the stock exchange.

To achieve that aim, all parts of the company (and so the S-Bahn) have been forced to bring an exorbitant return-on-investment at the expense of maintenance care. Consequently great safety problems with brakes and wheels have affected a large number of trains, bringing down the S-Bahn-owned rolling stock to only a third of its capacity. As a result, 1.2 million passengers who travel daily by train have endured for months numerous problems. The feeling that arouse among passengers varies from anger to resignation, and unfortunately, it won’t only be just a few who will now use their cars. 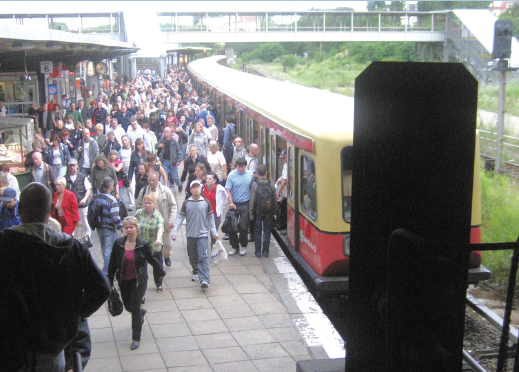 Step by step, Germany has established a competitive market since 1994. As a consequence, enormous changes in railway transportation took place since the whole railway transportation has been transformed – unfortunately only de jure – from a monopoly network infrastructure into a kind of structure ready for competition. Before this, railway transportation was provided by Deutsche Bahn. That was too expensive and not costumer-friendly at all. To solve that problem, parts of the system have been passed onto private hands. The goal was to have a clear public transport structure with federal governments (ordering and paying for the service) on the one hand and the operators (providing the service) on the other hand.

Partially, the privatisation succeeded, the results are great : reduced costs and upgraded quality. But the privatisation process has not been finished yet and we find the public transport sector in a difficult position, only half way through : the de facto monopoly Deutsche Bahn still owns network infrastructure and rail tracks as well as the stations. It still covers the whole energy supply for all private operators. As a result, the public transport branch has to deal with very high prices on rail tracks and stations usage and on energy. This is the monopoly-profit for Deutsche Bahn that discriminates the new private operators. On the other hand, we have less regulation by anti-monopolistic administration. The few private rail operating companies are actually much cheaper, the service is better, and the trains are cleaner. But the high prices on rail usage are a real obstacle for competition. We have learned that the market needs to be framed by rules. Networks and transport operation must be in different hands !

What can we learn from this situation, and how can we avoid such problems in the future ? Let me give you some thought-provoking impulses says Hans-Werner Franz. Tendering processes and strong contracts are the solution. I am very proud about our latest success : VBB tendered 50 per cent of the public rail transport services at once (the S-Bahn as a system sui generis has not been affected by that). And we introduced an innovation in limiting the batches (several lines summarized is one batch, four batches in total) and in deciding the winner could only win two pieces ; that’s why the winner was forced to be cheap – to get at least one batch. As a result, we could drop down the costs by 55 Million Euros (about 25 per cent) – since all operators wanted to win the tendering. The money saved is planned to be invested for higher frequency, more passenger information and more elevators. 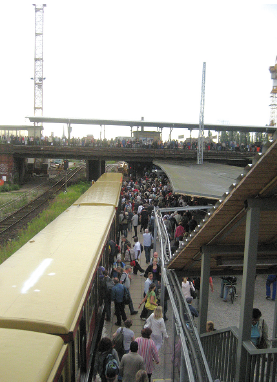 Moreover, since quality standards were set, the quality did increase. We wrote down the number of staff per train (the minimum is one conductor per train) and ruled that salaries are paid in line with the level of the sector (to avoid salaries being too low). The contracts with the public transport operating companies provide several instruments to reduce the compensation in case of malperformance. This excellent experience is the blue print for tendering the S-Bahn in Berlin. Limiting of batches is essential since in the current situation Berlin and Brandenburg are dependent on only one operator.

It is very important also for the whole system to clarify who plays which role. Competition does not mean that public authorities have nothing to do. On the contrary they organise the tendering procedure and monitor the transport companies. In some cases they (or a separate state or a city owned institution) own the networks and stations, and provide the energy. As a rule, monopoly infrastructures (rails, stations and energy supply) must be separated from the operators. Otherwise, these natural monopolies will be abused by their owners (like Deutsche Bahn in Germany) and other competitors will be disadvantaged. The operating companies still have a lot to do with transportation, marketing, and sales. To come to a conclusion : If we want to increase our market share against the private car, three things are of utmost importance for public transport : quality, quality and quality.

Besides, we have to change the system to reach better efficiency. That means stimulating competition in order to save money and to improve quality.