On 1 April 1999 a uniform tariff for public transport was introduced in Berlin and Brandenburg. The VBB-Tariff, is used within 41 public and private transport enterprises. Approximately six million people living in the capital region of Germany use since ten years a similar ticket to ride on the whole regional public transport whoever the operator. They may also benefit from attractive tariff offers, like the special ticket for students or the new senior ticket “VBB-Abo 65plus”.

These good figures confirm the efforts of the VBB to achieve a public transport system more attractive for both the passengers and the transport enterprises. The suburban traffic in Berlin and Brandenburg enjoys a high level of service which is confirmed by customer satisfaction surveys, regularly undertaken by the VBB. Competition on the rail contributes also to an improvement of the quality of the public transport network. 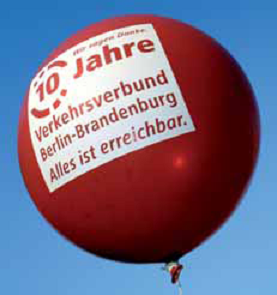 With an extent of about 22 million train kilometres per year and a volume of around € 1.3 billion Germany’s largest call fo tenders was started in autumn 2008. Under the name “Netz Stadtbahn” (metropolitan railway network) 16 regional railway lines, with a contract running-time of 10 and/or 11 years, were tendered out. Operation will start on December 2011 and last until the end of 2022.

The federal states (Bundesländer) of Brandenburg, Berlin, Saxonia-Anhalt and Mecklenburg- Western Pomerania have entitled the VBB to launch the tendering procedure.

The preliminary result leads to financialsavings of approximately €50 million per year with simultaneous quality increases. Among other things new measures to accessibility will be realised in the future contracts. CCTV and more service staff will increase security in the trains. The travel time will be reduced in some parts of the network as well as highecapacity offered. All trains will be equipped with air conditioning.

A characteristic of the tendering procedure is that the network, which consist of 4 lots, will be splitted up to at least two enterprises. Herewith the transport authorities want to distribute the financial risk and arrange for more competition on rail for a long time. On Monday 27 July the tender was approved:

VBB will launch an e-ticketing-system in the near future.

The VBB made an application for support to the German Ministry for Transport for a new electronic ticketing system called “INNOS”.

The project is two folded:

The costs for the first step amount to 3.0 million € (BMVBS and the federal state Brandenburg finance this part of the project). Together with the BVG (public transport company for Berlin), the first eTicket/smartcards will be handed out in April 2011.