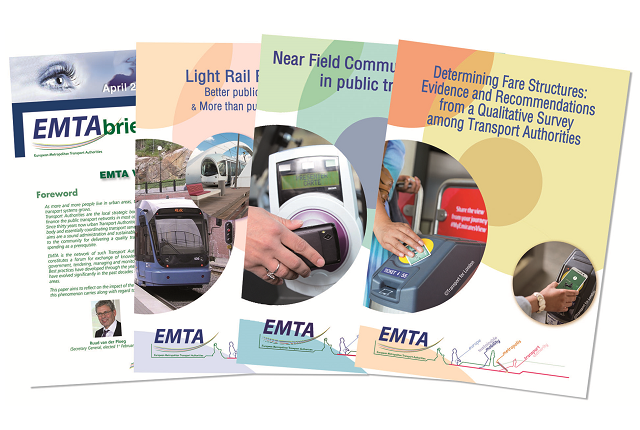 “EMTA reports, briefs or surveys” are publications that opens a series of summaries drawn from workshops or working groups organized by EMTA with a view to enrich common knowledge by sharing experience and joining thoughts.

A perspective on MaaS from Europe’s Transport Authorities (June 2019)

Report: A perspective of Maas from Europe’s Transport Authorities

This report was produced by Rebelgroup with the support of some EMTA members.

White Paper on Near Field Communication in public transport (April 2015)

If you want more information about Rob van der Bijl you can contact him on this email, visit this website or this one. You can also contact Niels van Oort on this email and visit his website.

Study on The urban mobility system and its public transport layer as core elements of competitive, sustainable and pleasant cities (September 2009)

Survey on electronic ticketing in public transport (May 2008)

The EU25 population aged 65 and over is expected to double between 1995 and 2050. The study aims at identifying the challenges for Public Transport services, presents best practices, and unfolds recommandations to take further actions.

Study on Capture of Land Value Premiums as a source of fundings for PTAs : Evidence and practice in selected European metropolitan areas (June 2004)

EMTA Report on mobility in the European metropolitan areas (May 2000)