For the first time in IDF, 3 main railway line services of the SNCF network operate on completely restructured time-tables which are now time-phased. The time-phasing* along with an increase of the service supply and a higher punctuality will benefit to 200 000 commuters every day, a major improvement of the Ile de France railway network.

Switzerland and Finland have already experienced time-phasing the planning of services. In France it started in 2007 with the metropolitan area of Lyon, and now STIF in Ile de France just adopted, on 14 December 2008, the 56 m€ project. 3 main lines departing from Paris are concerned:

Services on those lines are now organized according to a regularly phased frequency rate, the time-table pattern routinely repeats itself along the day in service hours and the stops are always identical. Planning through time –phasing allows increasing the number of train services particularly off-peak hours, at night or during the week end, and optimizes the infrastructure. The decision of restructuring the frequency rate in the time-tables comes as the result of major changes in the mobility activity in Ile de France. 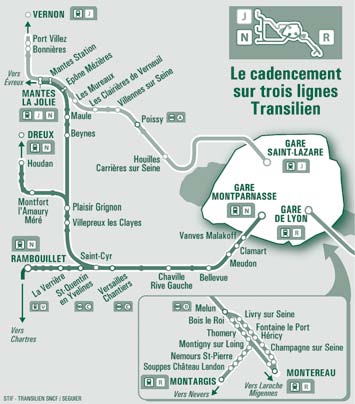 Since 1999, SNCF enjoyed a 25% increase in the number of passengers, half of which (12.6%) occurred from 2005 to 2007. The railway network capacity is nearly saturated particularly in those areas close to the six main train stations in Paris. The patterns of mobility behavior also have changed. More passengers are riding late in the evening, in the week-ends, during school recess or in summer time. Since the 80’, traditional morning and evening peak hours tend to extend, overlapping off-peak hours. Finally the need for reinforcing the role of Public Transport as a creditable alternative to private car use triggered the decision.

Finally the time-phasing of services on the 3 main lines offers a customer oriented triple answer to this challenge, as it ensures:

The measure is seen as a major step forward in meeting the emerging mobility needs while ensuring sustainable and less polluting public transport services. This major improvement is the result of two long years of close collaboration between STIF, SNCF Transilien (the operator) and RFF (the infrastructure owner). At times the collaboration extended to neighbor regions such as Haute Normandie, Basse Normandie, Bourgogne and Centre who engaged themselves into the process of time-phasing the services of regional trains (TER) under their responsibility, thus interacting with Ile de France time-tables. Besides, a process of local consultation with travelers and political decision-makers was organized at the inception of the project in December 2007, and later on in October 2008, with a view to circulate information, build a consensus and monitor progress made.

Progressively and according to an agreed agenda, other lines will apply to time-phasing services until the whole Ile de France Railway network Transilien is completed. This major improvement falls into the ambitious programme for developing the supply level on the Ile de France Public Transport network adopted by STIF’s Council since 2006. Already the combine efforts to increase capacity of buses, metros, trams, trains and RER (regional express trains) decided by STIF and implemented by the operators, amount to €500 m. It represents a significant and visible answer of the Transport Authority to the challenge of sustainable mobility.