BEST : Benchmarking of customer satisfaction with public transport in Europe

BEST stands for Benchmarking European Service of public Transport. It is a non-profit project that started in 1999 with the overall objective to increase the use of public transport in European urban areas.

In 2008, the following cities participated in BEST :

BEST AND THE EMTA BAROMETER [1] : The EMTA Barometer of Public Transport compares the following aspects of participating city/regions :

The BEST Survey compares how the citizens perceive the public transport service, a useful comparison in addition to the “hard facts” provided in the EMTA Barometer. FOCUS ON CUSTOMERS : The BEST objective is to strengthen public transport organisations focus on customers needs and expectations, and to establish a learning process among public transport professionals in Europe.

COMMON SURVEY : A common survey is conducted each year in the beginning of March. This is the only survey in Europe that collects comparable satisfaction data for public transport on a regular basis – and is in this respect a unique source of information. 1.000 citizens are interviewed in each of the participating cities / regions about their attitudes to public transport.

This makes it possible to compare results and benchmark the participating cities, and gain insights into the differences between them. In this way each city gets a better understanding of how well the public transport service performs in the eyes of the customer. The survey collects data about how citizens’ perceive the following aspects of public transport :

The main results for the 2008 survey are shown in the figure below (see http:// best2005.net/media/files/report_best_s urvey_2008 for more results). Geneva achieved the highest overall satisfaction score in 2008. 78 % of the population in Geneva was satisfied with the public transport system in general. According to the study, the citizens of Berlin were very satisfied with the traffic supply, with a satisfaction score of 86 % !. 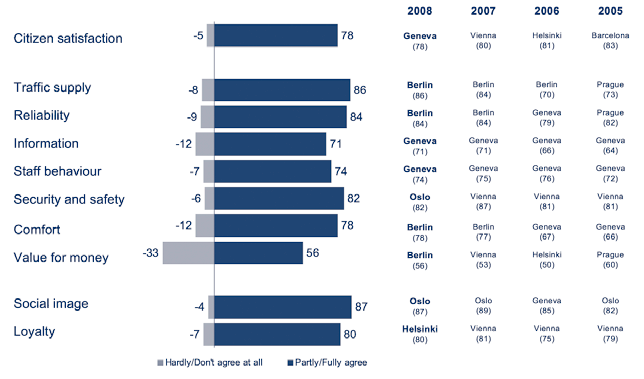 EXCHANGE OF IDEAS AND EXPERIENCE :Each year a seminar is held for the BEST participants in a European city. The main objective of the seminar is to exchange ideas and experiences, and to create and maintain a network between public transport professionals. In addition a number of so called common interest groups (CIGs) are established to compare processes and activities within a specific and agreed area. The common interest groups (CIGs) normally have a couple of meetings between each seminar, where the agreed topic are studied more in-depth. In 2009 a couple of one-day workshops will also be held, to stimulate networking and exchange of ideas in various ways.

WANT TO PARTICIPATE OR NEED MORE INFO : If you consider participating in BEST 2009 or would like more information you can contact BEST Chairman Per Gellert in Movia by e-mail : peg chez moviatrafik.dk or BEST Project Manager Kjetil Vrenne, e-mail : kjetil.vrenne chez vrenne-enable.no telephone + 47 922 53 471. Deadline for cities that want to take part in the BEST Survey is the 2nd of February 2009.

For more info about BEST you could also take a look at our website : http://best2005.net