The Agenzia per la Mobilità Metropolitana is a consortium of functions instituted in 2003 by the Region Piemonte, the Province of Torino, the City of Torino, and the 31 Municipalities forming the Metropolitan Area.

The whole transport system managed by the Agenzia supplies about 75 million vehicles*km and serves about 175 million of paying passengers a year. Its mission is to promote the sustainable mobility of Torino metropolitan area and optimize the local public transport services through a single institution providing a coherent network of services by : 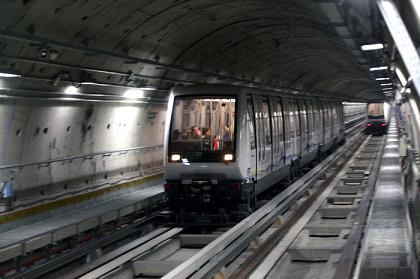 Since 1997 the national law entrusted the Regions and Local Authorities of functions and duties on local public transport. In 2000 the Regione Piemonte Law 1 has called for the settlement of the Agenzia per la Mobilità Metropolitana di Torino, and stated that the assigning of public transport services was coming to an end and a tendering regime had to be started by 2004. However, subsequent national financial laws and regional laws have postponed the start of the tendering regime.

Gruppo Torinese Trasporti GTT is the main operator, delivering urban and suburban services in Torino as well as extra-urban services in the Province, along with 2 railway lines. As a result, GTT is one of the biggest transport operators in Italy. The future foresees a possible joining of forces of GTT Torino and ATM Milano (the transport operator of Milan) with the aim to take on call for tenders.

Current strategies of the Agenzia call for the development of a stronger and more performing public transport system, integrating metropolitan railways, underground, a renewed streetcars network, and bus lines in order to better influence modal split (at present the share of public transport is 23%). Large size mobility surveys undertaken every other year over citizens resident in the Province of Torino, provide the accurate data to better shape transport planning.

A major project consists in the development of the Railway Metropolitan system SFM. The project dates back to 1998. The objective is to reinforce the structure of the transport network by connecting present regional lines with a new underground tunnel called Passante Ferroviario enabling a network of metropolitan railway lines within a radius of 50 km around Torino.