2007: demand and supply on the increase in Barcelona metropolitan area

On the demand sideThe public transport system of the Barcelona Metropolitan Area carried 934.8 million passengers during 2007, a figure that shows a relative increase of 2.7% that is to say 24 million more passengers over 2006.

The highest percentage rise was for the Metropolitan tramway with an increase of more than 23%, whereas in absolute values the most outstanding was for the Barcelona metro system with 13 million more passengers. Mention should also be made of the decrease in the Renfe Rodalies (suburban) network with a loss of 5 million trips, 4%, inconvenienced throughout the year by the work for the arrival of the high speed train in Barcelona and especially by the cancellation of some train services between 20 October and 30 November.

On the supply sideThe increased frequency of the Metro and FGC [1], as well as the expanded train capacity of Renfe suburban trains and extensions of the tram network raised the supply of railway services by 9.8%. Alongside, bus networks, both urban and inter-city, also increased by the same significant amount of 9.8%. 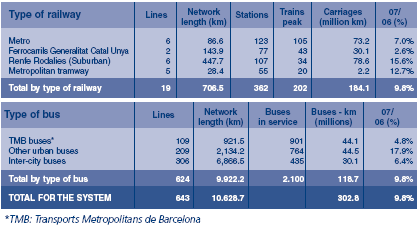 Mobility survey: citizens’ opinionAll modes of transport from private to public have been evaluated by the citizens. The average evaluation of the means of transport varies depending on the frequency of use but the main highlight is that citizens approve all means of transport the average score being above 5 on a scale from 0 to 10. Generally speaking people tend to have a better opinion on the mode of transport they use most frequently.

The specific opinion regarding the quality of different means of transport, stresses the disapproval by citizens of the safety aspect for people using the bicycle or motorcycle and the environmental impact of cars.