Successful measures for the development of Public Transport in the Metropolitan Region of Amsterdam.

Stadsregio Amsterdam the public Transport Authority responsable in both the City and the suburban area of Amsterdam, introduced competition as tendering of public transport services is now obligatory under Dutch law. A distinction is made between the regional services, covering the three suburban areas (Waterland, Zaanstreck, Amstelland-Meerlanden) actually tendered out, and the city of Amsterdam which, along with the other three largest Dutch cities had the choice by law either to tender bus services before 2009 and rail services before 2017 or else tender both bus and rail before 2012. Stadsregion Amsterdam chose the latter.

The results of the three regional concessions being awarded after an invitation to tender show that competition is indeed an effective measure to enhance efficiency and achieve a significant increase in both the number of services and the quality offered at no extra costs.

Because of a reduction in the national funding made available to Stadsregio Amsterdam, the budgets for the three concessions were reduced by at least 5% and up to 16%. The operators were expected however to provide a high quality of service along with an increase of volume of services operated with new fleets. The 2006 National Customer Satisfaction confirmed the good trend by ranking the two first concessions 2nd and 7th out of 82.

The revenues increased also for operators. The result of the third concession (south of Amsterdam) recently tendered out, showed already a surprising higher increase of services (+60%) partly due to an attractive catchment area comprising Schipol Airport bus network and Zuidtangent BRT. As for the local Amsterdam concession (including bus and rail services and maintenance of rail infrastructure) Stadsregio Amsterdam has negotiated a renewal of contract with the municipally owned incumbent operator in 2004 and 2005 GVB, with a cut of prices by some 11%.

However since a large part of the public transport budget is spent for local Amsterdam, a necessary further significant reduction of costs would be expected from the introduction of competition. A decision on such competition is expected by the Board of Executives of the Metropolitan region by the summer of 2008. 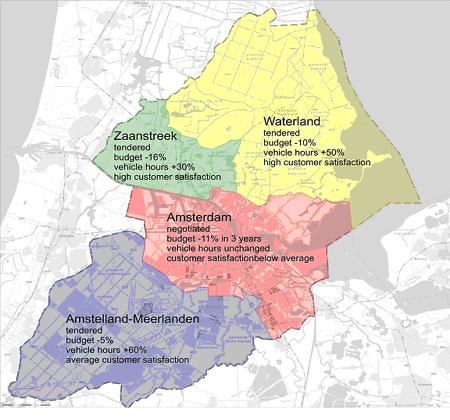 “Our region has benefited considerably from the Dutch law which makes tendering of public transport services compulsory. We are confident that the next step introducing competition on the local Amsterdam network, will be at least as successful as the previous steps“ says Mr Verbeek, executive for public transport on the Board of Executives.

Yet in past months discussion in Parliament was raised whether mandatory tendering should be upheld, considering the motion Dutch Parliament pleaded this summer to exempt municipally owned transport companies, that can be considered as “in-house operators” under the new regulatory framework of the European Commission. The Board of Executives of the Stadsregio awaits the outcome of the procedure by which the Ministry of Transport executes this motion in order to strike the current tendering obligation in the National Transport Act for local public transport services.

The Board could live with a legal situation whereby authorities are given a choice in whether or not they want to tender out or directly award the Amsterdam public transport in one or more concessions.