As the south-east part of the Nantes metropolitan area was lacking efficient public transport lines, but as the expected demand in this area was not in accordance with the cost of a tramway line, it has been decided to introduce “Busway”, a new transport mode, coupling the flexibility and the cost of a bus (Mercedes Citaro) with the reliability and image of a tramway. 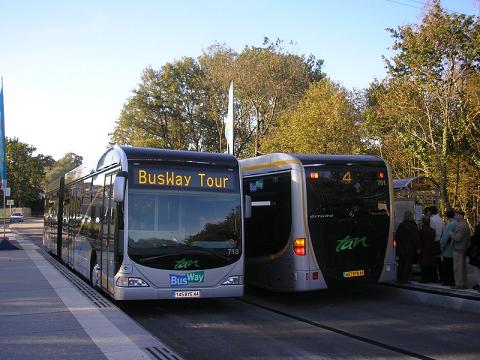 The Busway runs every four minutes at peak hours, uses a dedicated infrastructure separated from car traffic and has priority at crossings which allows a commercial speed of 20 km/h.

Busway is 7-kilometre long and has 15 stops served by each service. Stops have a specific shelter design and four Park and Ride facilities have been built on the line. The investment costs amounted to € 53 million including € 10 million for the rolling stock.